The Eclipse has one of the most interesting premises of the GMMTV shows releasing this year, and I had been excited for it since it was first announced.

Please take this first impression with a grain of salt, because I do realise that a plot that deals with curses and eclipses, rule breaking and mysterious deaths, and a love story in the middle of all that, will not reveal everything in the first couple of episodes, but they are the only thing I’ve got to base this first impression on, and so far, there are some inconsistencies in writing that are hard to ignore with how plot heavy the show is.

The story takes place at Suppalo School, which is prestigious, but at the same time has rumours of a terrible curse that befalls upon those who break its rules (so far, they have only mentioned not wearing the correct uniform, but I do hope it fleshes out and explores the restrictive nature of the rules themselves in later episodes). Akk (First Kanaphan) is a prefect at Suppalo, in charge of ensuring the rules don’t get broken, but his school life turns upside down when a new transfer student, Ayan (Khaotung Thanawat), begins to pry into the secrets of the school while rebelling against the rules. Ayan has his own reasons behind the sleuthing, for he wants to solve the mystery of his uncle’s death, which seems to be tied to Suppalo. They also have to deal with instances of harm being perpetuated towards a group of students protesting against the uniform, which seems to be tied to the curse. 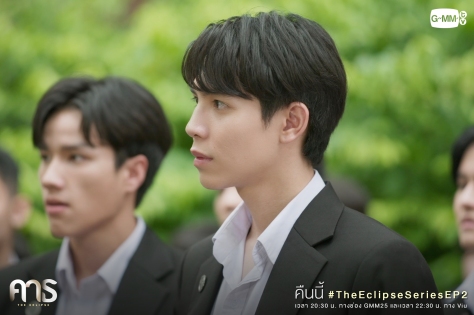 Akk and Ayan have great chemistry from the onset, both actors embody the respective awkwardness and flirtatious behaviour as their characters cross paths again and again, however, there are more than a few inconsistencies within their interactions. I can only attribute that to the writing, because in one scene you see them laugh together while playing with Singto (a dog, not the actor), and the other they are back at odds with each other. There is tension of the romantic kind, but it escalates into arguments that end up unresolved.

Speaking of a lack of resolution, there is inconsistency in how the curse of the eclipse itself is written; we are supposed to believe it is serious enough to actively concern the prefects and almost cause bodily harm to those protesting against the school’s well-established rules, but it is glossed over at other times, when one of the same prefects (Kan, played by Neo Trai) talks back to a teacher, or when absolutely nothing happens to Ayan despite the numerous instances where he disobeys the rules. Whether he has the protagonist’s plot armour working for him, or whether it is simply a plot hole, or a more likely possibility that the curse’s selective nature will be explored in later episodes, is yet to be revealed.

Since this is only the very beginning of the series, I hope they end up fleshing out the writing over the next few episodes and provide greater consistency. Meanwhile, I will continue to watch it for the premise and the promising relationship between Akk and Ayan.