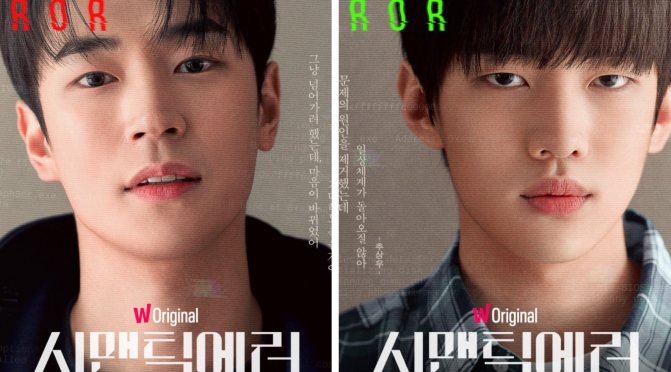 After a joint school project in which Cho Sang Woo writes off the other group members due to lack of participation, Jang Jae Young cannot graduate. In a fury, he seeks out Sang Woo, leading to a fun, tension-filled, chemistry-fueled, rivals-to-lovers story that manages to retain the essence of the webtoon that inspired it.

Hate-to-love tropes have always been my favorite because it’s a trope that allows for growth. Rocky beginnings create some of the strongest stories. There isn’t much I can say about The first two episodes of Semantic Error other than it delivers precisely what it promised to deliver. It’s fast-paced without feeling fast, beautifully setting up the unfolding story between Sang Woo and Jae Young.

Although I’ve read the webtoon and seen the animation, my goal is to keep how I feel about the drama separate from the two. The live-action is its own entity, and it’s doing a remarkable job of making people interested in the story that inspired it.

Because I am a fan of idol groups KNK and Dongkiz, I am already familiar with the two leads as music artists, but I am even more impressed with them as actors. They both have a natural ability that is comfortable to watch. Park Seo Ham as Jae Young has the more expressive character of the two, and he does a fantastic job of showing Jae Young’s range of emotions, from witty to retaliatory to soft. It’s always the toughest that falls the hardest, and it’s evident Jae Young is already catching feelings for the man he meant to torment.

This brings me to actor Park Jae Chan. Tsundere characters are the hardest to portray, their expressions often consistent and cold. It takes a talented actor to manage the subtle expressions needed to convey emotion while maintaining no emotion whatsoever. Park Jae Chan has executed this beautifully, lending a vulnerability to the often stoic Sang Woo that makes it easy to fall in love with him.

I have honestly not been this excited for a Korean BL since Light On Me and To My Star.

If you are looking for a fast-paced, chemistry-laden rivals-to-lovers story, then Semantic Error has got precisely what you need. Check it out now on Viki or Gagaoolala.