This is Marc and Vee love story, bought to life by popular Thai BL actors War Wanarat and Yin Anan.

If you have watched “En of Love: TOSSARA”, you will probably remember Marc as the one who also had feelings for Bar (Folk Thitiphat). Well after being turned down by Bar, Marc gets drunk and when Vee tries to help Mark, Mark mistakes him for Bar. He remorsefully confides that he likes Bar and doesn’t understand why Bar wouldn’t return his feelings. In his drunken stupor, Mark kisses Vee and they end up sleeping together. Regrettably, Vee asks Marc to not tell anyone about their drunken liaison, since he has a girlfriend.

Problems arise when Vee slowly realizes that he has started developing feelings for Marc and isn’t sure what to do about this dilemma. Vee realizes he does like Marc more than a friend. As Vee and Marc spend time together, they slowly fall in love. One of my favorite quotes from this series is- “When you’re with me, do not think of her.” as Marc sadly requests this of Vee. Vee and Marc have a very interesting dynamic. They are both alphas and both love wholeheartedly and hurt easily. Both are very afraid to admit that they like each other.

When Vee learns that his girlfriend is cheating on him, he feels crushed. He goes to Marc to seek comfort and solace. The surprising factor is that Vee doesn’t seem that upset by his girlfriend’s infidelity. Frankly, he seems relieved, as if a huge burden has been lifted off his shoulders. Despite his reassurances that there is their relationship is over, Mark catches Vee kissing his ex. Vee is crushed beyond limits. He refuses to talk to Vee, even though Vee tries to explain himself. Vee truly loves Marc, but he doesn’t get the chance to confess. Is it too late for Vee? Atleast Mark gives Vee the impression that it is too late. Marc ostentatiously flirts with others to hurt Vee’s feelings. I was upset with the way Mark treated Vee without giving him the opportunity to explain what had transpired that day. Marc was really brutal and I felt sorry for Vee.

The chemistry between the Mark and Vee feels awkward at first, but it gets better as their love begins to start blossoming. They do try their level best to understand each other. The interactions between the characters feels forced at times. Vee was obviously my favorite character in this show and I was cheering for him all the way to the end. Love Mechanics is definitely an intriguing show; it isn’t exactly my preferred choice, as I’m not a huge fan of Mark’s flippant attitude. Mark mostly comes across as a selfish and arrogant person, someone who doesn’t care much about other people’s feelings. I liked the storytelling and the execution was amazing, This entire series had so much potential, but it wasn’t explored to the fullest. This one just fell short of my expectations! 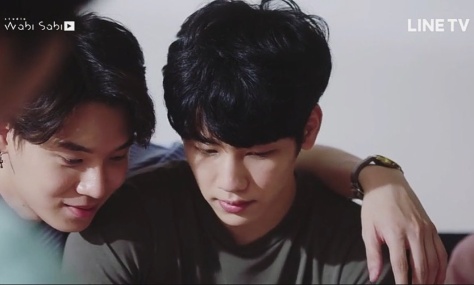