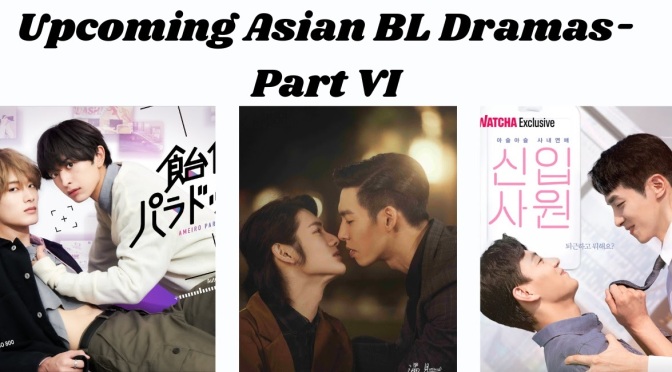 Its year end and we still have a steady flow of new dramas lined up for the premiere. Some of the upcoming shows are highly anticipated releases aiming to serve your delectable palette. Boys’ Love genre is slowly evolving into a marketable enterprise, with creators offering mature storylines that are relatable and individualistic. In today’s feature, we will be talking about the veritable December releases alongside upcoming shows that are in the making!

Fish Upon the Sky couple Phuwin Tangsakyuen (NuengDiao) and Pond Noravit (Palm) will be returning to the silver screen with their mafia styled romance, Never Let Me Go. After almost a year long wait, the show will premiere on 13th December, 2022. Although Fish Upon the Sky failed to garner any positive ratings, Phuwin & Pond’s on-screen chemistry was celebrated. They have a loyal fanbase and their online interactions obviously act as a bait for recognizable fan service. Due to its mafia themed storyline, comparisons are inevitable (HIStory: Trapped (TW), KinnPorsche and Unforgotten Nights). It will be interesting to watch if Never Let Me Go can keep up with the high standards set by its predecessors. Joining the cast are the newly introduced BL couple, Perth Tanapon (Chopper) & Chimon Wachirawit (Ben). While Chimon is a GMMTV regular, this will be Perth’s first major project after joining the GMMTV cadre.

Nuengdiao is the heir to a prestigious family. His status has forced him to grow up alone with no room for imperfection. Then his father is shot to death and he’s forced to pick up the reigns. However, he and his mother’s own lives are in danger. Palm is appointed to protect him from the dangers in and outside school. In his life of uncertainty, Palm’s presence leads Nuengdiao to new experiences.

Adapted from the manga “Ameiro Paradox” (飴色パラドックス) by Natsume Isaku (夏目イサク), Candy Color Paradox is the fifth project in MBS’s ambitious “Drama Shower” programming block. Following into the footsteps of its successful predecessors (Fukoukun wa Kiss Surushikanai!, Senpai, Danjite Koi Deha!, Takara-kun to Amagi-kun and Eien no Kinou), the show banks on the “Enemies to Lovers” to drive the romance between main leads, Onoe and Kaburagi. Starring FANTASTICS from EXILE TRIBE member Keito Kimura as Satoshi Onoe, and M!LK group member Jyutaro Yamanaka as Motoharu Kaburagi, Tomoyuki Furumaya is both directing the series and writing the script alongside Miyako Hatano. The show is set to premiere on 15th December, 2022 and will have a total of eight episodes.

Satoshi Onoe takes pride in the good writing and ethical reporting he does in his job at a weekly magazine. But when the stakeout teams are shuffled around, he ends up being paired up with Motoharu Kaburagi, an ill-mannered photographer who is nothing but trouble. Onoe despises Kaburagi’s haphazard and unethical reporting methods, and the two bicker constantly. But Onoe’s annoyance begins to shift as he spends more time with Kaburagi, and his feelings turn a bit sweeter.

A man who'd do almost everything for exclusive news vs.. a righteous journalist. This live-action of a PG18 BL manga is gonna be finger-licking good! 😏 #MBS #飴色パラドックス #AmeiroParadox #JapaneseBL pic.twitter.com/jnL4RmphYm

Korean BL industry is evidently into office affairs. Following the huge success of the recently concluded “Roommates of Poongduck 304”, we have a slew of workplace liaisons lined up for release. Leaning onto the popularity of its successful venture, Semantic Error, Watcha is actively promoting its upcoming release “The New Employee”. Adapted from the web novel “The New Employee” (신입사원) by Moscareto (모스카레토), the drama showcases the budding romance between the virgin male lead Seung Hyun (Moon Ji Yong) and his cold, reserved boss, Jong Chan (Kwon Hyuk). Ji Yong was recently cast as the main lead in “Once Again”. His portrayal and on-screen chemistry with co-star Lee Hyun Jun was much appreciated. It would be interesting to watch if he can recreate the same magic with new co-star Kwon Hyuk. The show is set to premiere on 21st December, 2022 on Viki.

[ENG] Trailer for #TheNewEmployee has been released by Watcha. The drama will premiere on Dec 21st. pic.twitter.com/h7hvIrzcOs

Seung Hyun is a virgin guy in his late twenties. A late bloomer, he finally manages to score the internship of his dreams. On his first day at work, he runs into the handsome yet cold Kim Jong Chan. Who is he? Just Seung Hyun’s new boss! Will the two be able to keep their hands off each other at work?

[ENG] A second trailer for #TheNewEmployee has been released by Watcha. The drama will premiere on Dec 21st. pic.twitter.com/frluX2BkBW

HIStory5: Love in the Future

The fifth sequel in the hugely popular HIStory series, “Love in the Future” is all set to premiere on 28th December, 2022. Starring Sean Chang (Tai Che Ni), Linus Wang (Hai Yi), Anson Chen (Liang Wen Hsen) and Jason Tauh (Lin Huai En) in the lead roles, the drama is time travel romance with a workplace setting as the backdrop. Despite its controversial content, “Close To You” (the previous installment in HIStory series) was celebrated because of the sensual chemistry between the main lead couples. Will Love in the Future follow into the footsteps of its successful predecessors and recreate history? International platform is still unannounced (most probably the show will premiere on Gagaoolala first, with a follow up on their YouTube Channel months later).

Depicts the office romance between Zhang Shou Hang, a cheerful young man who travels for 22 years to the future and his boss, Wang Bi Wei.

☆ IQIYI is actively promoting its upcoming Korean BL, “The Director Who Buys Me Dinner”. A workplace romance with an eloquent touch of reincarnation arc and fantasy elements, the storyline is adapted from popular webtoon of the same name (밥만 잘 사주는 이상한 이사님) written by Toesa (퇴사) and illustrated by Yang Eun Ji (양은지). Starring rookie actor Park Jeong Woo alongside Park Young Woon, the show promises a delicious chemistry between the main leads. Streaming on IQIYI Global from 15th December, 2022.

No oppas were drugged in this dinner 🤣

[UPDATE] the trailer for #TheDirectorWhoBuysMeDinner has been released in iqiyi with eng subs 🙂 https://t.co/gHX5d3DpTz pic.twitter.com/xEFjfVKnVj

I Feel You Linger in the Air

#หอมกลิ่นความรักวายพีเรียด
Even time cannot break them apart. The love of "Jom" and "Khun Yai" that will make you always remember.#IFeelYouLingerInTheAir#DeeHupHouse pic.twitter.com/bYOW4Odz4f

Probably one of the most anticipated historical BLs, I Feel You Linger in the Air is Deep Hub House’s first venture in 2023. Adapted from the novel “Sweet Smell of Love” (หอมกลิ่นความรัก) by Violet Rain, this show is a time travel romance coupled with fantasy elements. Following the phenomenal success of the recently concluded Thai Lakorn, To Sir With Love, historical BLs are totally in demand. As such, the anticipation and excitement surrounding this drama are understandable. I Feel You Linger in the Air pairs veteran actor Nonkul Chanon alongside Bright Rapheephong in the lead roles of Jom & Khun Yai. The shooting for this drama has begun and will most possibly premiere in the first half of 2023.

Jom is an architect responsible for the renovation of a historic house alongside the Ping River. There he discovers a wooden chest packed with old drawings, drawings that look strangely familiar. The contents are intriguing. However, Jom doesn’t have time to concern himself with them; he must take a trip back to Bangkok to see his love. For years, Jom has been counting the days till his boyfriend would return from his far away studies, only to find him engaged to someone else. Heartbroken, Jom comes to a place of acceptance as he runs his car into the river. In the cold darkness, Jom catches the sweet scent of fresh frangipani flowers coming from the stream and in the distance, he can make out a deep, gentle voice pronouncing clearly, “Pho Jom.” Jom will find himself waking up in 1920s Chiang Mai.

☆ Nonkul Chanon will be playing the main lead, Jom

#หอมกลิ่นความรักวายพีเรียด
"Jom" Architect who has talent for design. He might look forceful on the outside but the inside he is really lonely because … He is waiting for his love to come back from abroad and live together. @cnonkul #IFeelYouLingerInTheAir#DeeHupHouse pic.twitter.com/hW15KUn0Vz

#หอมกลิ่นความรักวายพีเรียด
"Khun Yai" middle child of Luang Thepnithithum. He looks strong on the outside but the inside he is kind and gentle. Khun Yai has a dream to study abroad to see the bigger world.
@brightrpp_ #IFeelYouLingerInTheAir#DeeHupHouse pic.twitter.com/AJXT56nFsB

Deep Hup House’s second venture in 2023, Step by Step is an age-gap romance in an office setting. Adapted from the web novel “Khoi Khoi Rak” (ค่อยๆ รัก) by summer december, the show stars rookie actor Ben Bunyapol alongside Man Trisanu in the main lead roles of Pat & Jeng. “Lovely Writer” star Up Poompat will be playing the supporting role of Put.

Jeng is a fierce digital marketing manager despised by his subordinates in the company. As son of the owner, there’s little he can do about it. Pat studied abroad in LA before coming to work as an enthusiastic new member of the team. Jeng develops a secret fondness for his new subordinate, but in this position, he has to be particularly strict and picky with Pat. It comes to a point where Pat decides to submit his resignation, sparking a reform in the workplace.

☆ Ben Bunyapol Likhitamnuayporn will be playing the main lead, Pat

#เปิดแคสค่อยๆรัก
‘ PAT ’ An employee of Jian Group Public Company Limited. The energetic new worker in Digital Marketing Department. He is serious about work and likes to help others.#ค่อยๆรัก#StepByStep pic.twitter.com/0ZhnMYezHj

☆ Man Trisanu will be playing the role of Jeng

#เปิดแคสค่อยๆรัก
‘ JENG ‘ A Manager in the Digital Marketing Department
of Jian Group Public Company Limited and also owns a restaurant. He is a leadership person, who takes everything seriously and full of passion.⁰⁰#ค่อยๆรัก#StepByStep pic.twitter.com/53bzp3Abhg

☆ Up Poompat will be playing the role of Put

#เปิดแคสค่อยๆรัก
‘ PUT ’ A famous actor who is full of glamor. He is a serious person and easily gets stressed. But also love a challenge and love justice.#ค่อยๆรัก#StepByStep pic.twitter.com/IDvC26mrzc

The social media handles for upcoming Thai BL, “Be Mine SuperStar” recently announced their main leads. And it was no surprise, since there were rampant rumors hyping the possibility that JaFirst might lead this project. So no prizes for guessing this right; Be Mine SuperStar will be JaFirst’s fifth Project together (Tharn Type 2: 7 Years Of Love, Close Friend, Don’t Say No and Remember Me). Adapted from the novel “The Superstar and the Puppy on Set” (พี่พระเอกกับเด็กหมาในกอง) by Orpheus, the show has an ensemble cast comprising Benjamin Brasier (2moons2), Bosston Suphadach (UWMA, Between Us), Jo Kavinpat (War of Y, My Roommate, Make It Right 2), Kokliang Parinya (TharnType The Series, Even Sun) and Best Natapoj Tanatip-udomchok.

Third-year film student Punn gets an internship on the set of a drama. He’s come there to learn from professionals, but what lights his passion even more than the work is leading man Achi, beloved of the nation.

☆ Ja Phachara Suansri will be playing the main lead, Punn

☆ First Chalongrat will be playing the role of acclaimed actor, Achi

☆ Benjamin Brasier will be playing the role of Kevin

☆ Jo Kavinpat will be playing the role of Dr. Namning

☆ Kokliang Parinya will play the role of Diao

☆ Best Natapoj will be playing the role of Suea

☆ Wayo Peerawat will be playing of Title

☆ Yo Korkuer will be playing the role of Pai

Keep watching this space as we bring you further updates about Boys’ Love dramas from all over the Asian Subcontinent!