“You’re allowed to love yourself more.”

The heart has a great capacity for love. I’ve always felt that love was not meant to be contained; it’s meant to be freed to feel. It’s intended to bring us joy. But love, like anything else, is as much about pain and hurt as it is about healing and affection. Love is about finding that place inside yourself that is innately yours. It belongs only to the person you are, and even when handing that love to someone else, you still cling to a part of it secretly so that you don’t lose your sense of self while loving someone else. Even broken hearts make room for growth.

Adapted from the manga series More than Words and In the Apartment by Etsuko, the Japanese drama More Than Words is precisely what its title implies, a story of friendship and romance defined by feelings that can’t always be expressed in words.

Starring actors Fujino Ryoko, Aoki Yuzu, Nakagawa Daisuke, and Kanechika Daiki, it is a bittersweet tale that is less about romance and more about the diversity of love, pain and all.

There isn’t a single main character in More Than Words that I dislike. Despite everything that transpires, the love that Mieko (Fujino Ryoko), Makki (Aoki Yuzu), and Eiji (Nakagawa Daisuke) shared and the love Makki later finds with Asato (Kanechika Daiki) are beautifully told as much in its silence as in its dialogue.

How people feel about this drama will depend largely on how they approach it. It’s a realistic story about finding love in a conservative culture. It’s a raw story about changing affections and brutal realizations. It’s a story about sacrifice, running away, and remaining true despite everything. 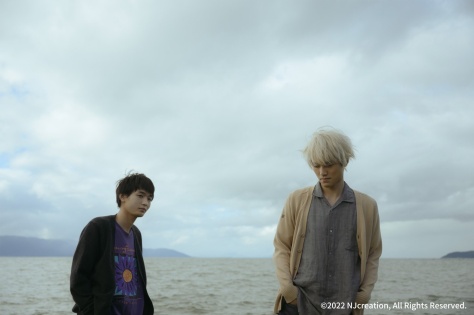 More Than Words is different from the light, feel-good BLs streaming recently on international platforms. Instead, it begs the question, “What if,” while delving into the lives of two people with very different personalities who aren’t great at expressing themselves. Together, they find their voice, but they also find heartache.

More Than Words isn’t a BL, it’s a coming-of-age story about two close friends walking the same path only to move apart.

The strong female representation is one of the most pivotal things about More Than Words. Like everything else in this series, Mieko is one of those characters some people will love, and others won’t. It’s all in how the story is viewed and what a viewer takes away from it. For me, Mieko is a stoic lead whose loyalty becomes the glue tying everyone together. She’s an ally in the face of criticism over Eiji and Makki’s relationship. And she makes a choice that shocks them all, offering to become the surrogate mother of a child she hopes will keep Eiji and Makki together while also keeping them both a part of her life. There’s desperation in her decision and desperation in Eiji and Makki agreeing to it, as their relationship was already unraveling. The desperation ends up tearing the three of them apart because choices made in distress are often rooted in personal traumas.

This brings me to another truth that isn’t often talked about but is too often used to save precarious relationships. Children are not meant to save marriages or partnerships, but pregnancy is often used to do just that. And there are many ramifications to using it, especially for the child. While having children may build an emotional connection between people that may not have existed before, it isn’t necessarily love. For some, it’s considered a burden. For others, it’s about responsibility and affection. And for still others, it is love. 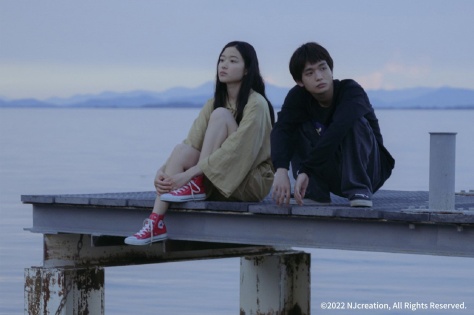 For the lucky children, their parents make it work, loving each other to the best of their ability as well as loving the child. For the unfortunate ones, the child is left reeling inside a home with little affection and the cold reality that they failed to do what they were born to do. They are made to feel like it’s their fault when it isn’t. In my father’s eyes, I was one of those children.

Fortunately for Mieko and Eiji’s daughter, having a child created a closer bond between them, strengthening emotions that were already there. While the ‘romantic’ relationship in this drama seems to be between Eiji and Makki, I never doubted that the love they all shared was between the three of them rather than just two. Mieko was content being their wingman, a close friend who thrived off them being in her life, but it was apparent they were all in love. Love comes in many forms, not just romance. Even after becoming pregnant, Mieko attempted to keep them together. But Makki could sense the changing tide in emotions, and he ran. Makki was the man Mieko and Eiji loved the most, and it isn’t easy going from being the object of two people’s doting affection to suddenly losing some of that.

After Makki’s disappearance and the birth of her child, Mieko tells Eiji he is open to doing what he feels he should, allowing him to be who he needs and wants to be. She doesn’t expect romantic love, nor does she expect him to remain. Their relationship isn’t fully defined, and there’s a nice balance to this: Mieko isn’t forcing anything on him.

In all actuality, none of this is Mieko, Makki, or Eiji’s fault. Sometimes we make choices, and right or wrong, those choices open the path to where we go from there. Not all relationships are meant to last. Most relationships teach us more about ourselves, our sexual preferences, and our identities. Some relationships break us, but we still take something from them.

But despite this and despite the drama mostly being told from Mieko’s point of view, the true central character and the most mysterious in More Than Words is Makki.

Although he’s extroverted and easy to get along with, Makki’s personally closed off. We have no backstory for him. He’s simply a character that enters everyone’s lives, stealing their hearts before leaving to nurse his own wounds. He never talks about himself, and he doesn’t openly communicate. But it’s obvious he’s scarred. From the tears that slide down his cheek while sleeping to his need to be close to someone, we know he’s in pain. He’s good at bringing happiness to others but not good at bringing it to himself.

And yet, one thing is clear. Makki’s greatest love is with Mieko. They have a friendship and deep understanding that is hard to find. His weakness isn’t Eiji; it’s Mieko. The connection he shared with Mieko was something he didn’t want to share with anyone else, and it wounded his heart to see her open up to the man he loved. 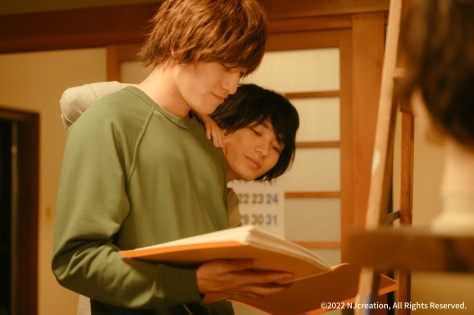 When Makki allows Asato into his life, we begin to get a glimpse into the man Makki is and his weakness for Mieko.

Although this drama gives viewers a realistic look at being gay in Japan, its real power is in showing that deep love isn’t always about romance. Love isn’t about gender, and it isn’t always about sex or intimacy. It’s about forming a deep relationship and bond with someone.

The real story in More Than Words boils down to Mieko and Makki and the things they were never able to say to each other but innately felt even when they were apart. The real story is how they came together in the end, walking with Mieko’s daughter before splitting to move in separate directions. They aren’t lovers or romantic partners and were never intended to be. Their love for each other was the understood emotional support they gave each other and how they sadly fell apart in a desperate bid to maintain their mutual happiness with Eiji.

It’s tragic but also happy. Because, in the end, Mieko and Makki found understanding in themselves. They found the love within themselves they lacked, the kind of love of self a person can only find within before allowing someone to share it. They found a way to be their own person rather than attached to each other. In many ways, they depended too much on each other for their emotional stability. Makki became the constant presence in Mieko’s life that she didn’t get from her parents, and Mieko held a place in Makki’s heart viewers may never understand. They found a better balance in the end, one that allowed them to be close friends while also allowing them to have their own lives, hence the split at the conclusion.

And that left an impression on me.

For a complex drama about complicated human emotions that aren’t always expressed in words, check out More Than Words on Amazon Prime Japan. For interfans, visit Furritsubs.