The idea of a one-night stand is that it’s the moment when you choose to do something that’s outside of your normal. That choice shouldn’t normally have any baring on the rest of your life because a random sexual encounter shouldn’t define you as a person; which is why I find it so ironic that for Kim (Ton Saran), it does. This is for me a great indicator of what “Unforgotten Night” offers on the whole. Beautiful to look at but lacking actual substance.

It’s such an off beat series, normalizing BDSM and masochistic themes around characters that could be interesting if they were better defined. For example,let’s talk about Day, Kim’s ex-boyfriend who suddenly pops up with his new boyfriend who looks just like Kim. I was surprised the show chose to include him in the first episode, but to see that his cute romance would continue through the series, felt a bit lopsided and that’s how it went for most of the cast. The ones lucky enough to be introduced were the names I remember. But many just appear and disappear without warning; made watching the subsequent episodes feel disjointed at best.

To be fair, the series doesn’t begin to get well, until the fourth episode when Kamol (Yoon Phusanu) goes up against Danai (Beam Sarunyu) in a battle of wits. Why a gangster/smuggler has a would be mafia kingpin gunning for him the entire time? The show doesn’t take the time to offer any viable answers. So we will assume it’s the same land deal in another country they were both wanting to build their same business on (Why they both had the same idea for a casino???). Instead of using his vast fortune to do something else, Danai’s single-minded focus remains on Kamol alone; which would have been interesting if the series stayed consistent on this track. 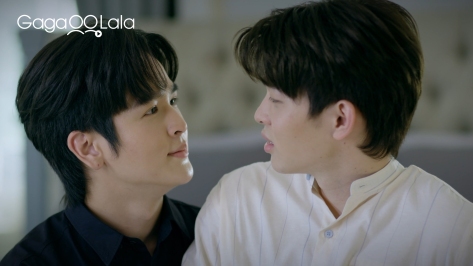 But it shifts focus to Cherry (Ging Areeya) who has her own single-minded focus on becoming Kamol’s wife. When the cliff hanger happened in the fifth episode, I was ready for the mess that would occur because of her and Kim’s first meeting. Instead, the conclusion was all too brief with a few barbed words exchanged before the show changes to different characters and storyline. That, to me, was my main issue with it as a whole. Everytime it started to go somewhere and explore some unresolved animosity or characters, it took a step back and focused on Kim/Kamol; which would have been fine but their cat-and-mouse seduction quickly devolved into BratTamer, with Kim far too old for the role of brat, even if his default face setting is pouting.

As Kim struggles with the idea of trusting Kamol, who actually has a lot hidden behind his cold deadly jawline, as a viewer I had to accept the fact that any semblance of a sensible plot was not going to be found here. Instead, it’s a series of vignettes strung together by Kim and Kamol’s would be romance. Their scripts made very little sense, as Kamol does everything he can to make Kim comfortable with himself. Yet Kim monologues in ways that rarely fit what’s being said to him. He either acts like, he doesn’t enjoy the lavish trappings of Kamol’s main estate, the intimacy growing between them, or the protection offered by guards who act more like brothers to him than body guards. It would be frustrating but he has been cast in the role ot brat, so I accept it. As they grow more voracious in the bedroom, he slowly accepts Kamol’s requests, it be for the small comfort to hug him, or traveling with guards.

Khom’s (Gun Thapanawat) relationship with Baiboon (Peat Suchanon) becomes a major portion in the second half of the series; him being 20 years older than the 15-year-old kid is treated tastefully. He barely touches him but acts as his guardian and friend, which was actually really touching. From the beginning, the feelings are mutual and portrayed by the two actors’s fantastic acting. Without kisses and NC scenes to draw and captivate the viewer’s attention, the actors have to rely on their body language and the script which, luckily for them, was written expertly and tactfully.

Ironically, looking at the show without the expectation of a continuous narrative made it easier to follow. Too much of the script is based on Kim’s views or his actions, with everyone else reacting to him. So when he goes for his trip to see Day and the new him (essentially), it was a bit jarring. Kamol is awfully codependent. Seeing the way Yoon portrayed his loneliness and unease is a testament to his talent.

Unfortunately, the last few episodes in my opinion, were completely ridiculous in accordance with their pacing and portrayal of the final story arc. Kim asking Kamol to leave the life wasn’t too surprising. With the murder attempts and sketchy characters Kim has seen over the past two months of their courtship, it’s only natural, but the way Kamol reacted to it, nimbly chewing it over while Kim sat on his lap was a bit underwhelming.

Over the course of the series, we watch so many people being connected to Kamol and his “work”; which is his life more or less, so I thought there would be a follow up conversation. Yet it was basically a build up to his boss’s brother Danil (Amen Sotthibandhu) joining the series for the last three episodes. This hot but annoying character set in motion the final conflict by ignoring personal safety and common sense; acting purely as a plot device. His actions get him and Kim caught by Danai.

If you have made it to episode twelve and were expecting some grand finale or the utilizing of many guards in a battle with the villains that would have validated their presence in the show; it’s not there. Instead, after Danil’s schemes come to full bloom, just for them to be caught, Kamol rallies the guards which is Khom,and two other guys. I kid you not. I was totally surprised by the lack of force for the last battle. The camera work was also disappointing, as it would have been the perfect time for tight close ups, fun fight scenes and epic music. But it was over in less than five minutes.

The remainder of the episode is spent undercutting a lot of unnecessary tension created from the last episode. Kamol learning that one of his ex employees dated Kim, Cherry being brutalized for her efforts to aid Kamol, Baboon being shot at by Cherry (a bit of information that everyone just ignores). Even the surprising polygamous relationship between the guards who seem to love each other “vigorously” two episodes back, is all wrapped up with a red bow in the last five minutes of the finale.

It’s hard to say if this was a good show or a bad show. If you’re in it for steamy love scenes and cute characters who are mostly gay, you’re gonna love it. If you’re looking for drama and spice and action; this is not for you, it’s basically a live action Yaoi. Gorgeous sets, sexy men, and not a lot of plots with random cute scenes straight out of a manga. Unforgotten Night is a show I think most people will forget.