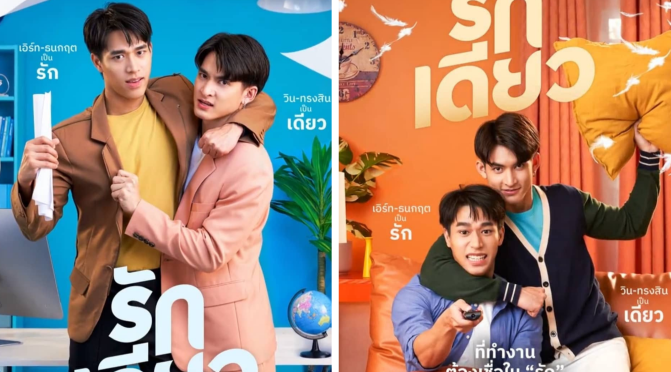 So no one told me there’s a Thai BL sitcom.

When I started watching the first episode of Rak Diao (or One Love), the thing that threw me off completely, and will most likely throw off anyone else who isn’t expecting it, is the presence of a laugh track, something I haven’t heard on a series in ages and honestly, haven’t missed even a little bit. I won’t pretend like it’s horribly distracting until you get used to it – but more on that when I get to the actual review below.

Diao (Win Songsin), the protagonist, is fresh out of university and newly employed at a company where his friends work and he’s at odds with his new boss from day one. And Rak (Earth Thanakrit) – Diao’s boss – is also the Diao’s new tenant, renting out an extension of the house where he lives with his sister. They can’t stand each other (but in true sitcom fashion you know that’s not entirely true), and so shenanigans ensue.

The cast is fantastic. They have excellent comic timing and never come off too corny, even though I do warn you that the humour is sometimes difficult to follow when it gets culture specific. The leads especially do a great job, and have really good chemistry and even though Diao is sometimes the most annoying character on the planet, I did care for most of the characters and enjoyed watching their relationship progress.

The enemies to friends (to lovers) trope is, yes, done, but the rivalry is funny and the progression, while not 100% believable, was entertaining to watch. You can tell that Rak’s feelings for Diao have changed about halfway through the series, and it’s just a matter of waiting for Diao to catch up through multiple long soulful looks and other cute moments.

The series also looks good, the production value is on point, and while the cinematography doesn’t really stand out, there’s a fresh, clean look to everything which makes for fun viewing. I also liked the way the leads were dressed – both characters had their unique wardrobes that reflected their personalities. 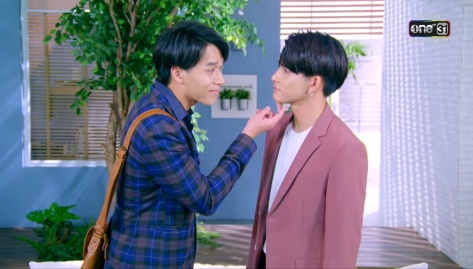 The laugh track. It is genuinely one of the hardest things to get used to, especially when it’s for a joke that doesn’t translate well in English subtitles (which also vary in quality) and you’re just waiting for the tinny laughter to end so you can go on with it. And, of course, the bane of Thai comedy series – sound effects – sometimes make you feel like the sound editor was just pushing random buttons on the sound board.

I already mentioned that Diao is one of the most annoying characters ever, but the side characters sometimes slip into that territory too, especially his friends. I am not a fan of using effeminate men characters for jokes (I mentioned how Secret Crush On You deliberately does not do this), and I think it is well past time we stopped seeing ‘shipper’ characters in BL series, although the one in this series is not as awful as some others, and some of her imaginary scenarios are funny.

The script wavers between being really entertaining and fun to occasionally cliché and weak, but overall it veers towards the better, and as I said before, the actors are really good at making the most of it.

I recommend Rak Diao if you’re looking for something that’s light hearted and doesn’t demand anything of you. It’s mostly episodic, as sitcoms tend to be, although character and relationship development goes on over episodes. It’s not ever going to be the pinnacle of television, but it’s fun and harmless and worth giving a try!