When I wrote my first impressions of this series, I came to the… uneven… conclusion that I wasn’t sure I liked it or not. Now that I’m done with the series, I think it falls on the side of liking it. Somehow, over the course of these fourteen episodes, I started really enjoying it and felt a kind of connection to the characters. 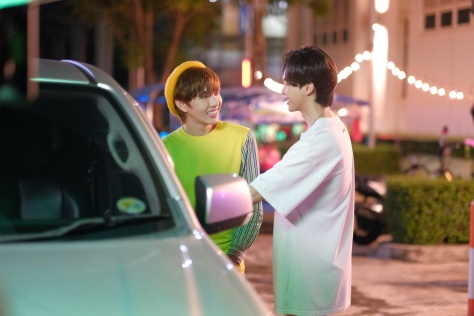 The Representation- Secret Crush on You does not shy away from giving characters who do not conform to traditional ideas of masculinity the centre stage. Most significantly in the case of Daisy, who is easily dismissable as the usual comic relief effeminate guy we see in most Thai BL’s, but it’s not that simple. Through the course of the series, Daisy actually goes through a story arc about gender identity and by the end of it, learns to be herself for who she is and it is handled in a very heart-warming way that is one of the high points of the series. Part of the reason for this is the –

The Gang: My favourite thing about the series is probably the friendships between the characters. Sure, they’re annoying and loud and constantly tease their friends, but somehow, the actors’ performances and the top-notch chemistry between them makes it work. They really feel like actual friends – something I’ve found lacking in some other series with University settings. When Toh’s friends are supporting him, it feels genuine, and not just actors reading off a script. I love when shows have this kind of strong ensemble cast, and SCOY does it brilliantly.

The Side Couples: I’ll talk about the main couple in a moment but I loved both the side couples, SkyJao and TouchDaisy (FreenBecky as Kongwhon and Fon are also a side couple technically but they’re in an established relationship so it’s less developed). Again, I’m often iffy about side couples, and when I heard there were two in this series I was extra cautious but as the show went on I found myself wanting more scenes of both and caring how their stories played out. Whether Touch being understanding of Daisy’s struggles with gender, or Sky being there in moments where Jao feels uncomfortable with his body, they are wholesome and you will find it hard to not like them.

The Cringe: I have to call a spade a spade and for every heartwarming, sweet, or wholesome scene in the series there are at least three that will hit you in the face with second-hand embarrassment. It’s this that almost made me drop it after episode one, because sometimes the overacting, or Toh’s obsession with Nuea, or just a ridiculous gag, gets a little too much.

Toh and Nuea: Yes, they are the main couple and yes, they’re fine. They have a story of their own, and we learn that Nuea is not the perfect prince that everyone sees him has, that he has his own insecurities. And their chemistry is good enough that their NC scenes aren’t too awkward. However, I am still very iffy about how Toh’s ‘collecting’ habit, where he obsessively hoards things that Nuea has been in contact with, is never talked about as a real problem. Also I wish they would keep their hands off each other for five minutes please (I kid, I kid)

The Story: There wasn’t… much of a story to tell. The characters and relationship develop throughout but the plot is weak at best, often cliché, and many scenarios feel repetitive. I wish more time had been given to Daisy and InTouch and their relationship because, as I mentioned above, it was one of the best things of the series for me.

Overall, I think Secret Crush on You is one of those series that you start watching expecting mindless crack – and yes, a lot of it is so weird, it’s surreal, but its heart is in the right place and it is more than likely to win you over.