Triage has an interesting premise; even if it has been done before, there’s still a lot of potential in a Groundhog Day-esque time loop story. The plot involves Dr. Tin (Tae Darvid), an ER doctor, having an unnamed male patient (Tol, played by Tee Thanapon) who dies in the emergency room after a car accident. By an unexpected twist, he wakes up on the same day before Tol’s death, and gets to know that he has to save Tol to stop this time loop, which presents its own set of challenges.

The first couple of episodes might seem a little unexciting, despite the thriller premise, but I’d recommend to keep watching because the show picks up its pace in the third episode and the fourth episode goes by blazing. If the latter two are any indication, the show should continue to be fast paced and engaging. There’s a lot they can choose with the non-linear plot going forward, and present the Butterfly Effect in all its twisted manifestations. There can’t be a linear progression to their relationship as well, since Tin will fall for Tol as the loops continue and he gets to spend time with and know more about Tol, but for Tol, time remains at an impasse. I might be wrong about this assumption, though, because the end of the fourth episode presents an interesting change- we see what seems to be Tol’s spirit in the autopsy room, who has realised he’s dead. 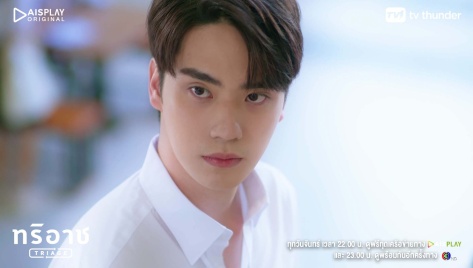 Tol’s case, and the time loops surrounding it, aren’t the only mystery in the show; Rit (Fiat Pattadon) is a patient who was brought to the hospital for injecting pesticide, and through the multiple examinations Tin undertakes across the loops, he realises there is something wrong with his kidney, which seems to be connected to their professor, Dr. Sak (Kradum Thanayong).

Other than the interactions necessitated by Tin’s need to save Tol, they haven’t progressed too far in their relationship as of yet, but I can see the chemistry and can’t wait for it to build up! I always felt that 2 Moons did not give Tae and Tee the time and space to develop their characters, much less their relationship, and had been pleasantly surprised by the gravity that Tee brought to Song’s character in The Miracle of Teddy Bear earlier this year. I was excited when I learnt that they were getting another project together, so that they could give their pairing another chance. So far, it’s paying off, and the relationship still has much to develop through the series!

I give Triage a solid 4.25/5 and I only hope that the rating will increase as the show goes on.

Bonus: Maxtul/Tanbun cameo!! It’s good to see that after the tumultuous events of Manner of Death, they seem to have relaxed into and developed their relationship, and I hope we get to see more of them!