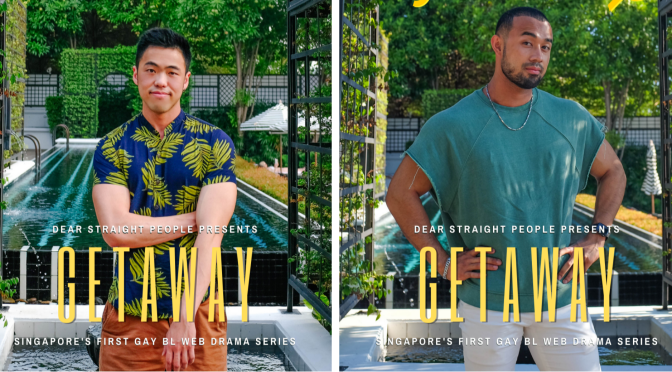 For BL enthusiasts eagerly awaiting news related to Boys’ Love drama originating from the “Lions City”; leading LGBTQ+ media platform Dear Straight People have achieved the impossible. In a country where homosexuality is still criminalised and queer representation is also banned in mainstream media, Singapore’s LGBTQ+ community finally has a gay BL web drama series to call their own.

So, why are they marketing it as a viable “Gay” content when it is labelled as “BL”?

BL dramas are typically geared towards a heterosexual female audience. As such, they generally miss out on the nuances of what it really means to be gay in Asia. Steering past the harmful stereotypes in typical BL dramas/movies, Getaway aims to cater to the broad range queer community. This rather ambitious yet groundbreaking project took more than half a year to produce. Funded by a diverse group of corporate sponsors across various industries, ‘GETAWAY’ hopes to raise visibility, understanding and acceptance for the Singaporean LGBTQ+ community.

Comprising five episodes of around 10 minutes each, the first episode of ‘GETAWAY’ will premiere on Dear Straight People’s YouTube channel tonight, with new episodes dropping every week.

After his coming out to his conservative father (played by Steven David Lim) goes horribly wrong, Singaporean Sam (played by Sean Foo) jets off to Bangkok in search of his exiled gay uncle (played by Otto Fong) for guidance, who was similarly disowned for being gay many years ago.

During his search for his uncle, Sam meets Top (played by Snooker Nalieng), a hopeless Thai romantic who has been unlucky in love.

Together, they search for Sam’s uncle, but they end up finding something much more.

Based on an original story from a gay creator, ‘GETAWAY’ features a gay director, Ark Saroj, alongside an openly queer cast from Singapore and Thailand. Ark Saroj is an openly gay director, photographer and artist from Thailand. Ark made his first short film ‘Porphyrias’ in 2008, which was shortlisted as the top 8 short films by Movie Mania. ‘GETAWAY’ marks Ark’s BL drama directorial debut, and he is set to direct another BL drama later this year. Award-winning author, playwright and screenwriter James Thoo, is working as a script consultant for this show.

☆ Sean Foo will be playing the role of Sam. Sean is the founder of Dear Straight People, and a digital content specialist with a knack for producing viral content. As an advocate of the LGBTQ+ community, Sean has been featured on media outlets such as Hornet. ‘GETAWAY’ marks his acting debut and first foray into scripted content production.

☆ Paween ‘Snooker’ Nalieng will be playing the character role of Top. He is a Thai actor best known for his role as ‘Big’ in the popular Thai gay web drama series ‘Gay Ok Bangkok’. Fluent in English and Thai, Snooker has over 25,000 followers on Instagram (@weensker).

☆ Hirzi Zulkiflie will be playing Hilmi. He is one of Singapore’s leading YouTubers, who has gone on to establish himself as a comedian, host and personality. An outspoken advocate for the LGBT+ community, Hirzi was the first ever Muslim ambassador for Pink Dot.

☆ Sirinutt ‘Sean’ Cholvibool will be portraying Dr. Big. He is a Thai model and one of Thailand’s leading gay influencers with over 300,000 followers on Instagram. Sean is best known for his lead role in the hit Thai BL drama series, ‘Bangkok G Story’, whose first episode garnered over 12 million views. 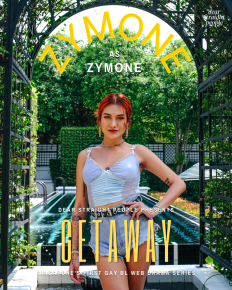 ☆ Steven David Lim will be playing the role of Sam’s Father. Steven is best known for starring in all 6 seasons of the hit TV series ‘Growing Up’. One of a handful of openly gay actors from Singapore, Steven boasts an extensive acting portfolio that includes roles in film, television and theater.

☆ Zymone will be playing her namesake. She is a trans woman and drag queen from Thailand. Not your average drag queen, Zymone can actually sing live. Zymone was a contestant on the 5th season of the hit TV show, The Voice Thailand.

☆ Otto Fong plays the role of Alex. He sparked a national controversy when he came out publicly in 2007, whilst still teaching at Raffles Institution. Despite intense pressure, Otto refused to issue an apology. Since then, Otto has become one of Singapore’s most prominent gay advocates. ‘GETAWAY’ marks Otto’s acting debut.

☆ Patsarun ‘Ohm’ Songput as Jom. Ohm is an openly gay Thai from the north of Thailand. Playing the cheeky boyfriend of Hirzi’s character, look forward to Ohm heating up your screens in one particularly steamy scene.’Getaway’ marks Ohm’s acting debut

☆ Phillips Loh as Dave. Phillips is an Indonesian-American who moved to Thailand around seven years ago. The former Harvard School of Public Health (HSPH) doctoral student currently works full time in the non profit sector. Passionate about HIV prevention programs, Phillips was a dancer for Taipei Pride alongside fellow cast member Sean Nuttapon Cholvibool in 2019

Founded in 2015, Dear Straight People is an LGBTQ+ media platform based in Singapore.

Dear Straight People first made a name for itself with its viral interview features. Notable interviewees include Paralympic medalist Theresa Goh, the world’s top gay Asian influencer Edison Fan and Asia’s most famous drag queen Pangina Heals. Since then, Dear Straight People has gone on to produce a variety of viral and impactful content that earned features on both Asian and international media publications.

4 thoughts on ““Getaway” The Singaporean Dream That Came Alive”