This is an unusually Daedalian story of a love that unfortunately got lost in its own details. While still a valent story, it perhaps tried to do too much and, in the process, lost its way.

The story, centered in India in the year 1996, begins with Tanay, played by Neelay Mehendale, who is an outgoing, intelligent, curious, inquisitive, and a handsome young man attending college and absorbing as much as he can about the world. He is gay, a bit overt occasionally, but must hide that fact as much as he can as it is in a time that India still views homosexuality as a ‘crime’. It is rather obvious that his literature teacher (Neil Bhoopalam), is not just a mentor to him, but is sexually interested in Tanay as well. This teacher lends him books to expand both his intellect and view of the world. To say the literature teacher had a very painful past would be underestimating his plight. Because he was caught committing the crime of homosexuality, he received electroshock therapy for six days and was essentially banished to teaching in this remote area of India. He understands Tanay.

One day, as Tanay arrives home, he notices a bicycle in the front of his house painted in cobalt blue. He walks in to see a mysterious stranger, played by Prateik Babbar, who has just rented the room where Tanay’s grandparents used to live. To Tanay, he sees a strongly built man, secure in who he is, with an arrogance and an essence about him that makes it hard to not be drawn to him. This stranger is an enigmatic figure, seemingly with no friends or family (and apparently no name) and wonders around like a free spirit. He obviously knows and senses that Tanay is enraptured by him. Since he is so readily able to sense Tanay’s attraction to him, he toys with Tanay. As Tanay shows him his room, the room is bathed in a cobalt blue patina on the walls. Since the mysterious man is a photographer and a painter, he uses the cobalt blue color for his artistic expressions and tries to reinvigorate the room he is renting. Before long, the two of them are inseparable and he seduces Tanay into a journey of exploring male bonding and sexual pleasures. Because Tanay is so young and inexperienced, he falls in love with this mysterious man. However, just as mysteriously as he arrived, the man suddenly leaves, but not before he paints a cobalt blue streak on Tanay’s neck as he sleeps. 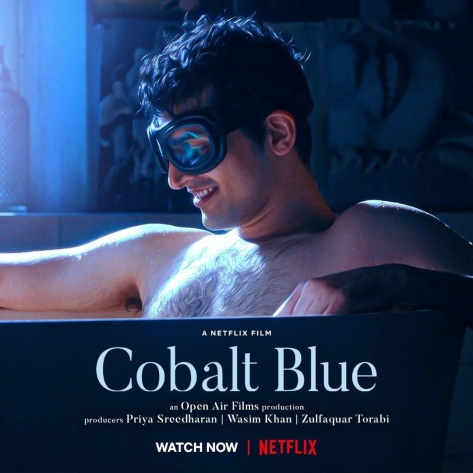 Tanay has a sister named Anjura (Anjali Sivaraman). She is a rather unorthodox individual; a bit precocious and an environmentalist, she does not conform to the standards of her time. Her hair is short, and she is more interested in playing sports than trying to be a proper female. Anjura seems intrigued by the stranger and is reflective about him.

When the stranger leaves, Anjura also follows him, destroying Tanay. Tanay has no idea that she was remotely interested in him or seeing him. When Anjura returns home, alone and seeing the world differently and now grown-up, she is now forced to comply with her father’s rules of proper behavior and decorum.

While an engaging story, it never really captured me. It belabored on with no clear sense of direction or focus. It is for sure a coming-of-age movie that just did not seem very impactful. When something of a lucid message is finally seen, it rushes through it. It was stupefying that Anjura ran off with the stranger, as there is no real indication in the movie that she was even remotely interested in him sexually let alone in love with him. Curious about him for sure, but seemingly no more than that. But obviously he was using both the brother and sister, which apparently was unbeknownst to either. Anjura could not figure out why Tanay was so cold and distant and so angry with her when she returned. When Tanay admits to his relationship with her lover, it then becomes clear to both that he was manipulating them. For me, this was a bit incredulous. Certainly, there were clues that displayed his disingenuousness. It certainly was very obtuse and unclear, but not surprising. This is where the movie fell apart. In creating this mystery, they neglected to have the story unfold in a way that was not so opaque. This made the story seem artificial and a bit fake to me. We were blindsided by the extent of the relationship with Anjura and got to see none of its development.

There is a lot of symbolism in this movie that frankly was just a bit too overwhelming and unconnected. While I understand that the color cobalt blue is striking, I could not figure out what it was signaling or signifying in this movie or the relevance of the ongoing color of blue except for effect. This whole movie always seemed to be on a journey in a round-about way with no clear orientation. The symbolism runs all through this movie but becomes more of a distraction than an enhancement and frankly is so unclear that it simply fades into an arcane story.

The acting in this movie for me never stood out. It became too awry and unclear. I got no sense of who these characters were because we did not see anything of a persona in any of them. There was no intensity or depth to who the characters were and therefore they were not relatable. Rather than seeing any kinds of development between Tanay and the stranger, we see a lot of esoteric word play exchanges with symbolic discussions about paintings and photographs sprinkled with intermittent sexual romps. And there was no interaction with Anjura and the stranger except for an occasional comment about his rudeness and a few glances. How can we understand what to ‘feel’ for her if we do not understand even a little what the extent of their relationship was?

This movie lacked so much. No solid character development or who they even were, for that matter. So much so that I did not care about any of them, except for the literature teacher, whose life was painfully despondent. Even at the end, when we see them struggling to extradite themselves from their home mooring, I could not feel anything. The story was too uneven. We see parcels of who these people were, but not wholeheartedly. Tanay’s story is as follows: he goes to school, comes home, finds a virile stranger living with them, becomes enamored, engages in wild sex, the stranger disappears, and goes off to find his own path again with a woman. Anjura’s story is even less complicated: a precocious girl falls in love with a stranger, runs off with him, is forced to return, must now comply with societal rule, cannot, and runs away. That is the gist of this story. It is just the bones of a story with no meat on it.

It is unlikely that this movie will stay with me for any length of time; it just is not that memorable.