Sasaki to Miyano is a fluffy romance that will give your heart, the much-needed hope that maybe love is still out there.

Based on the manga of the same name and written by Shō Harusono, the cutest winter 2022 BL anime has finally finished airing and we are here with our two cents.

The journey of first love is what Sasaki and Miyano is. The chemistry between the two characters is stunning. It is so sharp that even when they are not being intimate with each other, their attraction toward each other can be felt; even when they are just holding hands. The story in blunt terms is basic, but there are many things that make the anime unique, including their love. The first time when Sasaki confessed was on a train when he thought that Miyano was asleep, but of course our poor Mya-chan was awake and driven into a frenzy of gay panic. The scene was extremely funny. 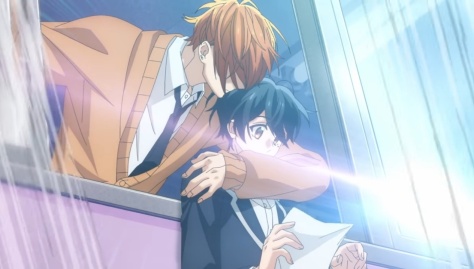 Let’s start with the premise of the anime and then we will get into the other details. So the first episode opens up with Miyano witnessing a fight and wanting to help the person who was getting beaten up. He calls the student council president and the head of the disciplinary committee but realises that it will be awhile until help arrives. He decides to jump into the fight to help the person. This is when Sasaki sees him. He realises that Miyano is about to enter the fight and thinks he should stop the fight in his stead. That marks the start of their friendship and eventual romantic relationship. Soon, Sasaki realises that the time that he spends with Miyano has a different meaning for him. He starts to look forward to meeting up with Miyano and soon realises that the feelings he is experiencing for Miyano are of the romantic kind. He first questions himself that how can he fall for a guy. But once he stops questioning his feelings and starts to embrace them, he becomes more affectionate toward Miyano. He then confesses to Miyano. Miyano does not share the same feelings, but he does not downright reject Sasaki. He takes months to ponder over the confession until he finally realises he feels the same way. Even though Miyano takes a long time to return Sasaki’s feelings, the story does not feel dragged at all. Everything is well thought out, every action has a meaning and a special contribution to the plot. There are no unnecessary distractions, no needless actions and no gratuitous drama. It just shows the story of two boys as they fall in love with each other.

Now let us come to the unique things about the anime (special mention to the kawai Neko(s) that the animators keep showing).

The personalities of the main characters. Sasaki is a tall man who radiates strong delinquent energy with his piercings and dyed hair but can be barely called one. Miyano on the other hand, is your average fudanshi who imagines BL plots almost everywhere. It is interesting how different they are, but still, their characters just complement each other. Miyano is very insecure about his looks. Ever since he was a child, people around him have said that he looks like a girl, which obviously made him struggle with his masculinity. But it is shown how with Sasaki’s help, Miyano comes to terms with his looks and that gives him the courage to crossdress as a girl in the school festival. They support each other and bring a positive change in each other’s lives. When Miyano shows Sasaki his BL comics, Sasaki does not question them. He just accepts them and starts reading them, without judging Miyano. Fudanshis generally have this fear of being outed and are scared that they will not be accepted in society, but Sasaki does not make Miyano feel that way. Even though Miyano was into BL and even though Sasaki too starts getting engrossed in them, they were never into boys. But only later on, they do start to like each other.

Now of course, there has to be a mention of the side characters, friends from each side who have always rooted and supported them. Tashiro Gonzaburou and Tasuku Kuresawa are Miyano’s classmates; the former is a prankster, while the latter appears to be your standard class bookworm, complete with a girlfriend and is a devoted lover. Both are incredibly supportive of Miyano as friends first and foremost, and they add variety to Miyano’s viewpoint. Kuresawa also frequently provides Miyano with much-needed guidance. Taiga Hirano and Jirou Ogasawara are two of Sasaki’s bad boys, the former being the same bad guy but highly disciplined due to his position on the School’s Discipline Committee. Jirou, on the other hand, is Miyano’s buddy Tasuku (not their personalities, but the relationship they have with their respective friends). He, like Tasuku, has a girlfriend, and like Miyano, his significant other is a BL enthusiast.

There are many scenes between the two main characters depicting that Sasaki and Miyano is not an ordinary BL anime, but it is much more mature. Both of them are self-aware and are trying to understand each other. They do not run from their feelings and even when things get difficult, they make it a point to communicate and solve the problems right there and then, or as soon as possible. They do not shy away from confrontations. The story is a fresh take on our good old BL story. The adaptation of the manga is beautiful. For the people who have watched Horimiya and Given, they might find some similarities. But in many other ways, it is very different. Also, for manga readers, there is a manga on Hirano to Kagiura. We get a glimpse of the couple in the series. We also get to see that Miyano is obsessed with them and keeps imagining BL scenes between them. 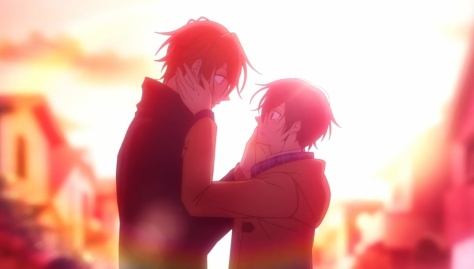 The last episode was just the cherry on top. We know what will happen, we can feel that Miyano will confess and that there will be a kiss scene. But the way it was depicted took me by surprise. The physical trajectory which builds up to the kiss was just perfect. Touching hands, hugging, touching the face and then leaning in to kiss. It was simply adorable. The entire series is absolutely adorable. It is a must-watch. Another season of the series has been announced already as well!