If I were to describe “Under The Skin” in one word, it would be- “Compelling”

iQiyi’s latest Bromance offering finished its run recently and avid fans were left heartbroken. At twenty episodes, this show spun a tale of empathy and human emotions that were interspersed with intelligent sleuthing and criminal profiling. The investigative case files involved an entirely new scientific approach- Forensic Art. While most suspense dramas train their angles on the main investigating team, the portraitist are never in the limelight. Under The Skin chooses to highlight these formidable policemen via its main protagonist- Shen Yi (Tan Jian Ci). Frankly, Tan Jian Ci was one of the main reasons for approaching this drama, because I was curious about his performance. Although “Winner The King” was Tan Jian Ci’s first tryst with the BL genre (we aren’t sure if this adaptation will be aired), he slips into his first lead role effortlessly. His confident depiction of the character role was much praised, and so was his natural chemistry with co-star Jin Shijia. The drama wasn’t exactly flawless, but the execution was brilliant, storytelling was exceptional and the actors did their job well. Before I slip up and write an entire sonnet on this show; let’s rewind, take a walk down the memory lane and understand the intricacies of this mind blowing suspense thriller! 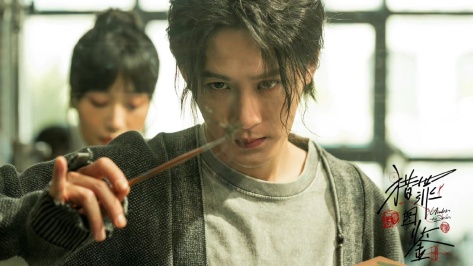 Tan Jian Ci portrays the role of a young painter, Shen Yi who has been resigned from the Academy of Fine Arts and enters the Haicheng Public Security Bureau mysteriously. 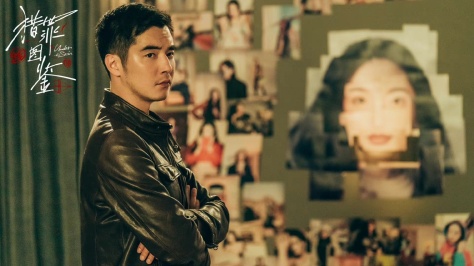 Jin Shi Jia plays the role of Interpol Captain Du Cheng. Daredevil and quite intuitive, Du Cheng is one of the best cops at Haicheng Public Security Bureau.

Baby Zhang plays the role of He Rong Yue. She is the forensics expert at Haicheng Public Security Bureau. 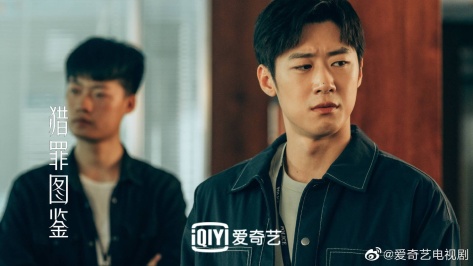 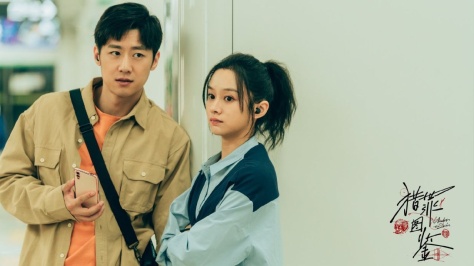 Lu Yan Qi portrays the role of Li Han. She is the IT expert in the team.

One of the finest artists of his generation, Shen Yi gets resigned from the Academy of Fine Arts and enters the Haicheng Public Security Bureau. Interpol Captain Du Cheng is left furious by his appointment as he is unable to accept someone who has caused his comrade’s murder.

Five years ago, Shen Yi, who was still a student, was sketching on the street. A woman gives him a picture of a child and asks him to draw what the child would look like as an adult. However, this painting causes the death of Haicheng detective Lei Yifei. Lei Yifei was Du Cheng’s mentor and close confidant. No matter how hard Shen Yi tries to recall, he is unable to draw the face of the woman who asked him to paint the child’s photo.

Five years later, the guilt becomes heavier. In order to find out the truth, Shen Yi accepts the invitation of Director Zhang of the Public Security Bureau and becomes a portraitist for the Interpol Team. Under Zhang Ju’s persuasion and arrangement, Du Cheng grudgingly accepts Shen Yi as a colleague, but he still despises Shen Yi’s ways of “drawing to solve cases”. Soon, the two became the “ticking bomb” of the team. However, after several collaborations, when Shen Yi repeatedly helps Du Cheng to crack difficult cases through his artistic skills and investigative acumen; he slowly starts to impress Du Cheng. More importantly, the truth of Lei Yifei’s death is still buried in Shen Yi’s memory. On the way to find out the truth about Lei Yifei’s death, the two people who were pursuing the truth alone gradually untie their knots and learn to rely on each other. In the end, “the heaven-matched partners” work together to uncover the dust-covered secrets and create a new world for each other.

Shen Yi Is An Enigma 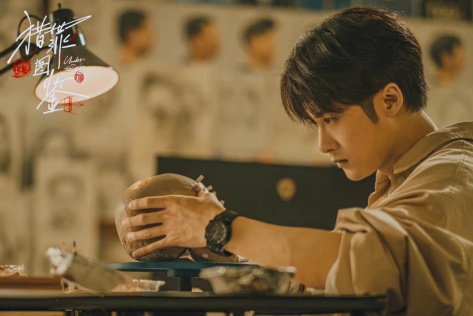 Shen Yi is one of the most enigmatic characters I have seen in a crime thriller. There is certain juxtapose between his past and present selves; Tan Jianci as Shen Yi impresses in both modes. While his past self was unbridled and reckless, Shen Yi’s current attempts to redeem for his mistakes will win your admiration. Unlike most forensic artists, whose prime focus remains on their portraits, Shen Yi is deeply invested in each of his case files. As such, he perceives things differently; recognizes the subtle nuances that most policemen might ignore and paints a picture that is 100% accurate. His investigative skills are on par with his artistic ability, and that makes him an invaluable asset. Tan Jianci balances the act perfectly as he portrays both- Shen Yi’s gentle and kind nature as well as his keen intelligence. I was often left surprised by his conclusive remarks and intuitions. Shen Yi is smart, suave and incredibly good at his work. Most of his portraits bear an uncanny resemblance to the culprits and that’s make a world of difference, when it comes to investigating cases where clues are surprisingly nonexistent. Shen Yi is not only competent but also highly dedicated and disciplined; a trait that establishes his name as a legend in the police circles. Tan Jianci is definitely an actor par excellence, because he portrays Shen Yi’s complex emotions effortlessly- the forboding guilt, resulting pain and attempts at redemption. Shen Yi will leave a deep impression on your psyche; definitely a memorable character! 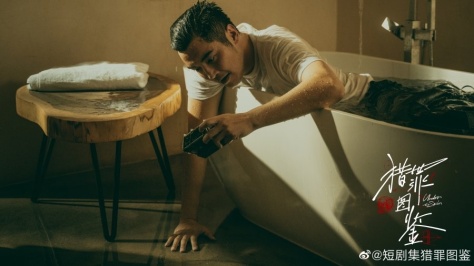 The pilot episode premieres with Du Cheng (Jin Shijia) recreating a crime scene. Obviously, it leaves you shell-shocked (who would go to such extents to find the truth). But this contrast sets Du Cheng apart from other policemen. He is not just an exemplary police captain but is also street smart and absolutely daring. While the show mostly shines light on Shen Yi’s artistic skills, Du Cheng becomes his silent supporter. The contrast between these two characters enlivens the script and makes it believable. Du Cheng is brash, doesn’t necessarily follow the rules but is also hard working. Though the pilot episodes focus on Du Cheng’s begrudging attitude towards Shen Yi; it also trains its lens on Du Cheng’s attempts to seek the truth. Despite belonging to a rich family, Du Cheng chooses to be a policeman. His attempts to seek revenge for his mentor Lei Yifei’s untimely death remain the prime focus of this show. Although he despises Shen Yi initially, Du Cheng grows to respect him in the long run; even allowing him to lead the investigation at times. Du Cheng doesn’t hold grudges for long and I really enjoyed watching his strict demeanor as well as playfulness.

The “Made For Each Other” Pairing

It wouldn’t be wrong to say that Shen Yi and Du Cheng’s bromance extends beyond the normal “Friendship or Brotherhood” zone. They initially have a rather tumultuous relationship as Shen Yi’s inability to remember Captain Lei Yifei’s murderer becomes a major bone of contention between them. While Shen Yi bears guilt and remorse, Du Cheng doesn’t trust his artistic vibes. Their professional recon begins with mistrust as Du Cheng bears grudges that cloud his judgment. But it doesn’t take long for Shen Yi to break those walls as they slowly grow closer. The best part about this subtle romance is the artful growth of mutual trust and understanding. While Du Cheng learns to appreciate and respect Shen Yi’s intuitive nature and his painting skills, Shen Yi leans on Du Cheng for support. Shen Yi brings out Du Cheng’s playful side and that’s seriously an achievement!

The turning point in this relationship happens when Shen Yi is attacked by one of the culprits, they are investigating and ends up drowning. Du Cheng rescues Shen Yi and spends the night worrying about him. When Shen Yi’s friend Lin Min questions the need to be a Policeman (instead of following into their Mentor’s footsteps), Shen Yi chooses to work as a portraitist. The smile on Du Cheng face betrays his relief and also his growing feelings. Even when others question Shen Yi’s abilities, Du Cheng’s single handedly shuts them down. His absolutee trust in Shen Yi’s skills is irreplaceable. As Du Cheng realizes the extend of Shen Yi’s pain and suffering (Shen Yi burns his entire collection of paintings because of his guilt), Du Cheng becomes increasingly protective of Shen Yi. It was amusing watching the once fearless man follow Shen Yi like a whipped puppy; or stare at him like he hung the moon and stars. Seriously, looking at Du Cheng fall for Shen Yi was a beautiful experience! 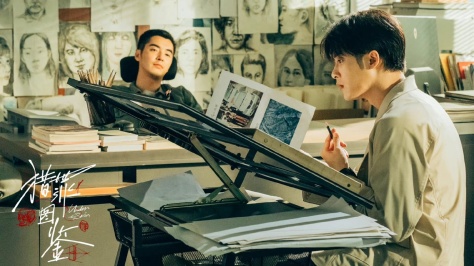 The contrast in their personalities blend so beautifully that it’s difficult to separate one from another. It’s been so long since I enjoyed watching a Bromance develop in such a daring and unhindered manner (reminds me of Hikaru No Go). While the script never deviates from its main purpose of crime investigation, Shen Yi and Du Cheng’s relationship becomes an intriguing yet intrinsic part of this suspense thriller. Their utter faith in each other is unfathomable as Shen Yi becomes Du Cheng’s “Hidden Trump Card”. Jin Shijia and Tan Jianci have a refreshing chemistry, and they are so comfortable around each other that the pairing is undeniably impressive. The journey which started from misunderstanding and hatred transcends through various obstacles and slowly morphs into something more substantial. Truly a blessing in disguise!

The encompassing cinematography in this show is noteworthy and lends a subtle enhancement to the various case files by setting the right tone and atmosphere. This might be the first crime show that entirely focuses on women and their predicaments- the social stigmas and rebuttals faced by them on a daily basis. The warm tones are mostly resplendent of their woes and although most of them are criminals, each of their stories highlights a different difficulty that drove them to despair. If I were to recount my favorite episode, it would be the tragic lesbian romance between the two adolescent girls whose struggles with identity crisis will leave you wounded. Xiaoxan’s inability to accept Qu Xianxin’s real identity is remorseful. Xianxin spends a decade loving a girl who thought it was better to kill herself than accept the person she liked the way they are.

While this quote might seem ominous, it makes sense when you scratch the surface and see the scars left on a woman’s psych who has been facing constant physical and mental abuse. Two women scheming to kill the one man who is the bane of their existence might seem farfetched, but it isn’t entirely impossible. Women are mostly empathetic to their own kind, specifically when the fight is against egoistic men who treat their women like punching bags or doormat. Although I don’t condone the women’s criminal act, their suffering bears testament to thousands or lakhs of women in similar situations. Life can be difficult until you find that one ray of light on a darkened path.

If you are a fan of crime thrillers but are bored with the same flavors, then this show should be high on your watchlist. The supporting cast renders their invaluable assistance in each case and has their own strengths. This is my second time watching Baby Zhang portraying the role of a physician (after Sweet Tooth). While He Rong Yue’s medical expertise is unquestionable, she is also empathetic and disciplined. Zhu Jia Qi’s Jiang Feng is Du Cheng’s second hand and they share a fun-loving camaraderie. Lu Yan Qi’s Li Han is another invaluable asset to the team because of her IT expertise. In short, the show allows each of its characters to breathe and shine. Each case is handled convincingly and although the drama majorly focuses on Shen Yi’s abilities, it never drives the attention away from the case files at hand. Shen Yi’s isn’t depicted as a God; he is humane and has his own flaws and weaknesses. Tan Jianci and Jin Shijia’s chemistry is a definitely a plus point. If you haven’t watched this drama yet, then you are missing out on a worthwhile experience!