The story itself has a strong start, effortlessly switching back and forth between the past and the present to reveal a love that began two lifetimes ago. Although much time has passed, novelist Yeon Seok is well aware of his previous lives and even utilizes it to write and sell his romance novels. Joined by a human-shifting nine-tailed fox named Jeong Ha Jin (Christine Jung), Yeon Seok desperately tries to find his first love, a woman he was torn away from.

What he doesn’t expect is that the woman he once loved has since returned as a man, Jeong Ha Yeon. 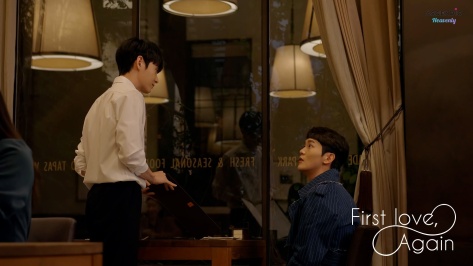 Because of the trailer and teasers leading up to its release, I wasn’t expecting the ultimately revealed drama. I typically expect heavier storytelling with historical or reincarnation story plots, especially those that deal with a tragic love story. First Love Again, however, does not go that route. Instead, it feels like a romantic comedy, mixing humor and pining romance to build a story about a novelist who initially pushes away the person he loves because he doesn’t expect him to return as a man.

While I enjoy the humor and light watch the show has offered in the first episode, I admit I was hoping for a deeper connection to the love Yeon Seok once shared with Jeong Ha Yeon. The humor takes away from the power such a story could have held, making the pull and tension I was hoping to feel when these two star-crossed lovers met once more seem less than.

It wasn’t until the end of the second episode that this story clicked for me. It was like hitting a light switch, as if the writers behind this couldn’t decide whether to make this show funny or serious. The sudden shift in Jin Gun’s acting from campy ‘stay away from me’ humor to a perplexed and thoughtful person was stark. I like Jin Gun as a serious actor. It was as if he had shed an outfit too small on him and embraced one that fit just right. I hope I see more of that.

While Yeon Seok’s character has been hot and cold, Ha Yeon has been consistent. I am living for Jeon Chang Ha in this role. I feel like he’s had an easier time because there’s been no dramatic shift in his character’s personality or actions.

Now that the reincarnation plot has been set up and we’ve fallen into the complicated part of the story where Yeon Seok struggles with his feelings while also dealing with Ha Yeon suddenly having a special someone, I have high hopes for what’s to come. Once Jin Gun slipped into a more natural acting style, the chemistry between the leads suddenly sparked and lit me up.

I am now anticipating the rest of the series.

If you are looking for a light romantic comedy about reborn love, check out First Love Again on Viki and Gagaoolala.