“It was really hot. Much hotter than I’d imagined. The lights on the stage were so hot. I don’t really remember anything else. I was just thinking about how I was actually allowed to say that much. I can’t describe that feeling very well. I want to do another show. I want to experience that feeling again. Also, I want to write another song.” – Mafuyu Sato

How does it feel when the world just goes on, but you, you are stuck in one place? At that one moment, where you wish you could’ve said something different, or you wished things turned out differently. But the reality is you can never go back. It doesn’t mean that the current situation will never change. Everything might still seem like a blur, but one day you will find the strength to focus again. Given is an anime adaptation of the manga by Natsuki Kizu by the same name. The anime quite beautifully captures the essence of the manga and gives it colour.

Given tells the story of artists. How the art saves them but it also has the capability of completely destroying them. All these characters are going through a whirlwind of emotions and how n their journey the only constant is music. Their only outlet is music, their therapy is music, their acceptance is music. On their path to discover who they are, it’s like they are walking on the musical notes. Playing each note with their steps, producing a beautiful melody of emotions. Rage, hatred, loneliness, grief and at last depression. Given deals with all these emotions in a beautiful way. It deals with falling in love while still coming to terms with your grief of losing a loved one. It’s visually pleasing and the animation gives a sense of peace with the use of warm colours. But that is the last feeling projected by the feelings of the characters.

Given is a story of a band with four members Uenoyama, Mafuyu, Akihiko and Haruki. Uenoyama is a high school student who often goes to take a nap at his secret spot during the lunch break. One day he finds Mafuyu at his usual spot. Much to his annoyance, he doesn’t speak much and sports an unmaintained Gibson guitar. He berates Mafuyu for not maintaining his guitar, much to his surprise Mafuyu doesn’t know that the guitar can be fixed. Uenoyama then fixes the guitar and Mafuyu cannot help but pester him to teach him how to play. Uenoyama unwillingly obliges. He then introduces Mafuyu to his other band (the seasons) members Akihiko and Haruki.

Everything is quite apparent in Given, Uenoyama ’s obvious talent but depreciating motivation, Haruki’s one-sided love, Akihiko’s toxic relationship. But there is one exception, Mafuyu. He seems to be at the centre of it. At the start of the series, Mafuyu’s character is almost mysterious. He also has an aura of darkness around him. Like even though the way his character is drawn almost resembles the sun, with his fiery orange hair, there seems to be a rainy cloud always blocking his sunlight. He seems emotionless on the outside, but on the inside, he is raging with emotions. He doesn’t know how to deal with these emotions. It’s almost as if he isn’t even aware that he has all these feelings bottled up inside of him. But music took someone dear from him. Now, through music, he’s learning to come to terms with his emotions while accepting a new person into his life.

Grief held Mafuyu in a death grip. And his grief isolated him from everybody. He is traumatised by what had happened it haunts him every waking second of his life. Yuki was the first for Mafuyu in almost everything. His first friend, his first lover, the first one who taught him the meaning of love. When you share so many of your important moments with someone it isn’t easy to let them go. Yuki was a part of Mafuyu and losing him, made Mafuyu lose touch with himself and his surroundings. He lost his voice. He also blamed himself for Yuki’s death. He never explicitly says this but it becomes apparent when he says “Are you willing to die for me, then?!” to Yuki during an argument. Yuki took his own life; he was under the heavy influence of alcohol. Mafuyu was the one who found him. That day haunted him, tormented him. He couldn’t comprehend that he was part of the reason why Yuki took his own life.

When Yuki’s mother gave Mafuyu his guitar, he carried it around like a curse. When Uenoyama first saw Mafuyu, he was clutching the guitar for dear life, trying to fall asleep. Like he was trying to escape reality and go back to the time when Yuki was still around, not wanting to let go of the memories because a reality without Yuki is scary. When Uenoyama offered to ‘fix’ the guitar for him, Mafuyu realised that the things which are broken can be fixed when the right person comes along. Maybe he wanted to learn how to play the guitar to be closer to Yuki. Or to even ‘fix’ what had been ruined between them. Or maybe he is just tired of living a life like that, devoid of feeling anything and everything. But he was getting closer to someone new who would ‘fix’ not only his guitar strings but the strings of his heart. And one who would help him overcome the overwhelming trauma of his past and live a music-filled life.

What happens when you feel so full of emotions but you’re still unable to say anything because you cannot find the right words? What would you say when you lost someone you loved and you’re filled with abounding emotion sand even then, you don’t know how you’re supposed to react at all? It becomes suffocating and then you explode. For Mafuyu this happens on the day of his performance. His song mirrors his emotions. He sang with such tremendous force that everyone present could hear his agony. And on the stage for the first Mafuyu realised how truly alone he had been. His song brings all he had been feeling out in the open. His performance freed him from the burden of the past which stayed with him like a boulder on his heart. 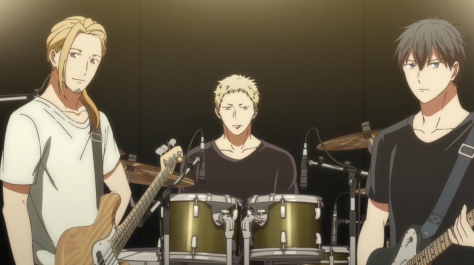 There isn’t much focus on Akihiko and Haruki as they are the side characters. But they are important for the plot. They provide the much-needed voice of reason, true to their role of being the oldest members of the group. When Mafuyu and Uenoyama seem to be struggling they step on the role of being the adults and help them out. Their presence also keeps the band together.

The thing that drew me closer to the characters was how real they seemed. How real their struggle is and how they are trying to deal with it in a way that they know best. Through music. Their beautiful sad song with lyrics of their memories and the sound of their life. Together it truly produces the most beautiful anime.