“Humans are born of belief, die of belief and are reborn from the ashes of belief”

With an interesting tagline like this, The Defective certainly sounds riveting. Adapted from Chinese BL author Priest’s novel “Can Ci Pin: Fangzhu Xingkong”, this anime is set in a futuristic dystopian universe where the formidable mind-link technology “Eden” controls the society. Priest’s novels are mighty popular in the Chinese BL circles and as such this Donghua was highly anticipated. Unfortunately, Bilibili and Funimation failed to bank on this excitement and the promotions frizzled out. As such, the general audiences failed to notice this Sci-fi thriller, which has intriguing elements of unhindered romance. Although the anime majorly focuses on the political discord in this pioneering society, ridden with conspiracies and murders; the love story between main leads Lin Jingheng and Lu Bixing always remains at the forefront. The CGI animation is stunning and the visualization will leave you spellbound. I’m still astounded with the lack of publicity for this space opera, which surely deserves its due diligence. The first season of the anime has successfully completed its run. As such, let’s review this exciting new series, that promises love and hatred!

Lin Jingheng was the ex-commander of the top space fleet in the entire universe. He is majorly depicted as cold, reserved and calculating.

Lu Bixing is the Headmaster of the Starry Sea Academy, which he built to provide education to the poor youth of his home galaxy. He is patient, persistent, kind and caring.

Owned by Lin Jingheng, Zhan Lu is the most powerful AI in the universe. He can turn into a robotic hand, when commanded by Jingheng and functions perfectly in sync. 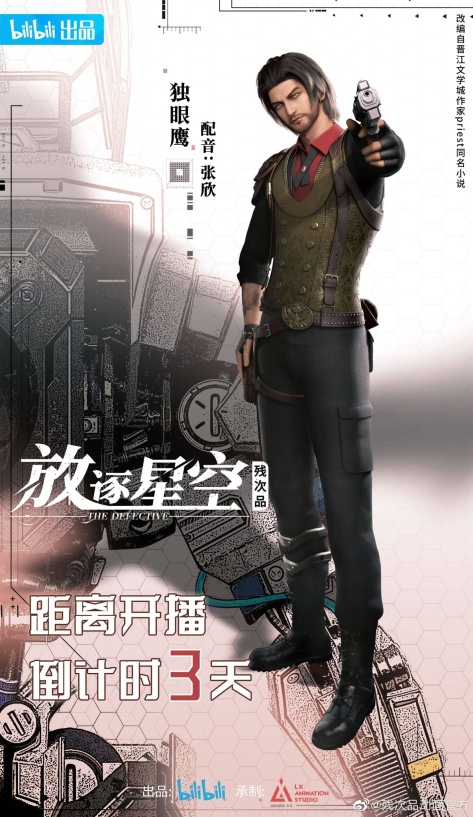 One Eyed Hawk is Lu Bixing’s adoptive Father. He is insanely protective of his only son and totally against his association with Lin Jingheng. One Eyed Hawk loathes Jingheng fiercely and does everything to keep Bixing away from him. 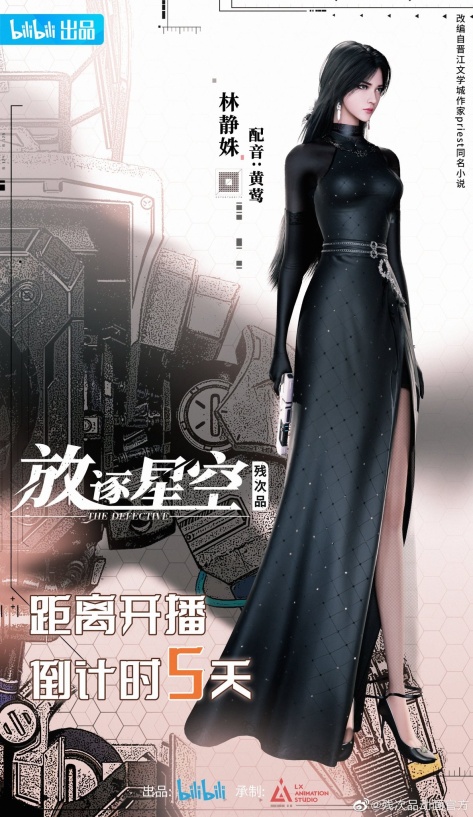 Lin Jingshu is Jingheng’s sister. She might be in cahoots with the rebels who are trying to overthrow the Interstellar Union.

Lin Jingheng is an enigma and incomparable to most protagonists in other Priest’s novels. Bilibili’s animation team have left no stone unturned in chiseling Jingheng’s perfect features and you can’t help but gawk at his handsome looks. However, behind those good looks, lies a brilliant and calculating mind that defies science and logic. Revered as the most successful commander in the history of the Interstellar Union, Lin Jingheng fell from grace when he was wrongfully accused and executed for his actions. Fortunately he managed to escape in a time capsule and was rescued. As the story progresses, we learn that Lin Jingheng is now living on the Eighth Galaxy and is known as Si Ge. He is the leader of the organization called “Black Hole” and is engaged in helping the downtrodden. This seems to be a front for his covert operations, where he discreetly monitors the Interstellar Union. He is also one of the most powerful mind adepts in the universe and can easily overpower ten mechas by seizing control over their neural networks. He mostly adds detached and unemotional, but he has a soft corner for Headmaster Lu Bixing. As his AI Zhan Lu rightly points out, Jingheng does admire Bixing a lot. He is also insanely protective of Bixing and their affectionate nature stems from a very close connection to Jingheng’s forbidden past life. If you aren’t intrigued enough, watch this anime to figure out more about this good-looking MC, who will keep you on your toes!

The Gentle Headmaster With A Heart of Gold

Lu Bixing and Lin Jingheng are an odd case of “Opposites Attract”. While Jingheng is reserved and ruthless; Lu Bixing is kind, caring and optimistic. Despite suffering from “Brainless syndrome” in his childhood; Lu Bixing studies hard, to develop his own neural transcripts and builds a school to guide downtrodden and lost teenagers. His warm nature draws Jingheng’s attention and they make a formidable team. Lu Bixing clearly has deeper feelings for Jingheng and learning Si Ge’s real identity leads to hero worship. While Lu Bixing might seem physically weak, he is brave and never backs down from a challenge. He cares a lot about his students, always encourages them and tries his level best to lead them to a better and acceptable life. As the storyline moves forward, we do learn about Lu Bixing’s true identity as former Commander Lu Xin’s only son. He loves and respects his adoptive Father, but they have recognizable differences when it comes to Lin Jingheng. You can’t help falling in love with this adorable ML and hope to protect him forever!

The Full-Blown and Bustling Romance

Their romance begins when Lu Bixing saves Lin Jingheng, whilst he is trapped inside the time capsule. Obviously, Bixing doesn’t recognize the famous Commander and unexpectedly his blood opens Zhan Lu’s gene lock. A lock which can be opened only by Jingheng or his late mentor Lu Xin. Bixing gets enamored with the insanely handsome man he has rescued and does begin their journey. While Jingheng/Si Ge isn’t overtly expressive, his feelings for Bixing are always on the surface. The entire season plays on their tug of war; where Lu Bixing tries his level best to get closer to Si Ge. While his fascination is understandable, the knowledge that Si Ge is actually Lin Jingheng gives an interesting twist to this romance. Both of them learn about each other’s true identities at the same time (although Lu Bixing still doesn’t know that he is Lu Xin’s son), their relationship takes a drastic turn. Jingheng has been searching for his late mentor’s child for a long time and the confirmation that Bixing is indeed Lu Xin’s son sets the precedent to this relationship. Both are extremely protective of each other. They often end up risking their own lives to save the other. I’m yet to see a classic Chinese Donghua that has portrayed its main lead’s connection in such a pragmatic manner. Kudos to the production team for projecting this romance in the right direction. Jingheng and Bixing are a “Match Made in Heaven”!

The Defective is centered in an advanced society, where the human minds are in sync with the mind link technology, Eden. Eden progressively controls negative emotions and as such, humans lead a carefree and positive life. This modern universe also has fairly advanced warfare, where they use automated machines called “Mecha”. The pilots are trained to sync their consciousness with the mechas’ neural networks and as such they command the warships through neural connectivity. While some parts might be difficult to understand in layman’s terms, the visualization is impressive. Lu Bixing and Jingheng reside in the Eighth Galaxy, which is furthest from the Union and as such, the planet is full of criminals and downtrodden people. Lu Bixing’s students are a band of misfits- Huang Jingshu, White, Fowl and Peppermint. Huang Jingshu suffers from Brainless syndrome and has difficulties handling mechas. White, however is a tech genius and the odd one in the group. Fowl and Peppermint have different skill sets. It isn’t an easy job to train them, but Bixing tries his level best.

The first season primarily focuses on the war waged by rebel Prince Kelet. He is the super villain, hellbent on controlling the Interstellar Union. As such, he successfully destroys the Silver Fortress which holds the key to their foundation. He also assembles various space pirates organizations in the same place, so he could assassinate them. Bixing and Jingheng along with his students escape death, while recuperating on an abandoned space station. One of the most interesting characters in this season is Inhuman. He is Prince Kelet’s Chief Commander and tasked with important missions. However, he has a major weakness- Inhuman loves conducting illegal human recombinant experiments and trains the subjects to be his minions. Jingheng’s first meeting with Inhuman is anticlimactic and our handsome villain gets enamored with the attractive intruder. Of course, Jingheng punishes him for his evil deeds and destroys his entire fleet. Indeed, a satisfactory ending!

I’m currently reading the book and frankly the adaptation is quite similar to the narrative. The storyline might seem a bit confusing at times; but don’t let that fact deter you from watching this animation. It is fairly engaging. The Defective is seemingly realistic and makes you yearn for this progressive future. Lin Jingheng and Lu Bixing’s budding romance is the icing on the cake and you can’t get enough of their dynamics. Their relationship is admirable and endearing. The CGI effects are mesmerizing and the fight sequences are well choreographed. Although we were left with many unanswered questions, The Defective is surely an entertaining watch. Bilibili and Funimation’s collaborations are always praiseworthy and this Donghua is no exception!

Links for the Novel and Anime-