Taiwan’s reckoning answer to the hugely popular Pinoy BL “Gameboys The Series”, this bilingual miniseries is a simplistic flair with bustling romance.

Although the entire show was filmed using smartphones, the production value doesn’t falter; neither does the narrative. Most fans would definitely complain about the relatively short run time. The timeframe can be compared to their formidable Korean counterparts. But when it comes to Taiwanese BL’s, people expect brilliant storytelling and quality production. KKTV’s modest attempt should be applauded, because shooting a minor production in the current Covid-19 scenario isn’t an easy job. Comparisons with web series like Gameboys and Hello Stranger are inevitable, but the strong chemistry between main leads Lance Chiu and Akihiro Kawai supersedes the minor technicalities. Without further ado, let’s review this fuzzy romance, that will leave you longing for more!

The Concept and Execution 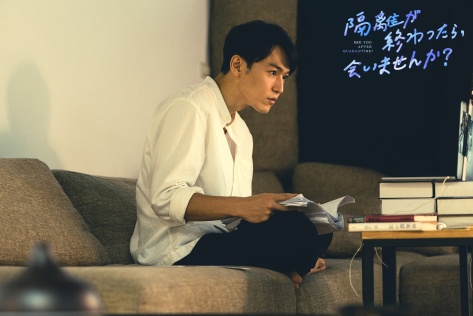 You can expect great things when screenwriter Lin Pei Yu is involved. Well known for her trendsetting dramas like We Best Love Series, HIStory: Obsessed, HIStory2: Right or Wrong, HIStory2: Crossing the Line and HIStory3: Trapped ; Lin Pei Yu is well known for writing succulent subjects that draw mass attention and become fan favorites. To be frank, I had mixed feelings about this drama, before I started watching it. Although I was expecting a good storyline; I was wary about their plan of action. The storyline majorly focuses on an internet romance, between two men separated by boundaries and languages. The beauty of this script lies in the flawless execution. Experimentation is evident, and I’m glad that the cinematography wasn’t compromised. You barely notice the fact that the entire series was filmed using a smartphone. The camera angles are slick and they don’t affect the production value. Certainly, an ambitious project, and yet the recurring theme of “Internet Romance” resonates. I was also worried about the repeated use of this subject. YouTube is flooded with numerous productions that are focusing on the tagline of “Social Love Stories”. I kept wondering if there will be any recognizable differences in this production. Honestly, I was left surprised with the results.

Romance In The Times of Quarantine

This subject has been interpreted in so many different ways, that it shouldn’t come as a surprise. And yet See You After Quarantine? manages to sail this ship into the uncharted territories, with a relatable honesty. Chen Bo Chun (Lance Chiu) and Itsuki Sato’s (Akihiro Kawai) fates get entwined because of a camera. Yes, you heard it right; Bo Chun is a wide-eyed college student, working odd jobs to support himself. He is also passionate about photography and has been saving money to buy his favorite brand of camera. Unfortunately, there is only one edition of the said camera left on the shopping website. While having a frustrating conversation with his best friend Liying; Bo Chun loses the chance to someone else. That someone else being Itsuki Sato, a popular online writer based in Japan. For Sato, the camera is a means to appease his ex-girlfriend and seek apology. Unexpectedly, Bo Chun’s current phone number belonged to by Sato’s ex-girlfriend in the past. As they both connect online, Bo Chun deduces that Sato has the camera he desires. With Liying’s help, he decides to fool Sato; but the plan falls apart when Sato easily recognizes the ruse. Their first video call ends with Bo Chun falling to his knees and apologizing; while Sato is left awestruck. It’s love at first sight!

They inevitably fall into an easy schedule of video calls and daily conversations. The chemistry is unassuming yet palpable. While Sato’s affections are far too obvious, Bo Chun is quite oblivious to his own feelings. That is, until Liying asks for his help to court Sato. Jealousy rears its head and Bo Chun is left confused at the contradictory emotions he experiences. On one hand, he wants to help his friend; but at the same time, he can’t help but feel insecure about their easy interactions. Obviously, these conversations happen online, which makes this entire exchange quite compelling. Lance Chiu, despite being fresh-faced manifests Bo Chun’s emotions quite vividly. Akihiro Kawai on the other hand makes his act entirely believable. His eyes convey Sato’s feelings, frustration, sadness and yearnings quite convincingly. This combination is eclectic, which makes it easy to get emotionally invested in their love story.

The chemistry is obviously electrifying, which leaves you spellbound and breathless. There is nothing like a good awakening call, when you start fantasizing about your so-called online friend. I’m so glad that this drama touched base with the “Coming Out” phase. The denial followed by slow acceptance were cleverly panned out. He doesn’t easily fall into the cycle of love or lust; Bo Chun has a hard time accepting the truth. Although Sato has a difficult time, while waiting for Bo Chun; Sato is definitely a patient man. This show has a “Feel Good Factor” with a refreshing approach. I was slightly disappointed that their “Happily Ever After” moments were relegated to the ending credits. I’m totally in love with this pairing, and an extended version of this miniseries would be a blessing in disguise!

The Medley Group of Supportive Friends 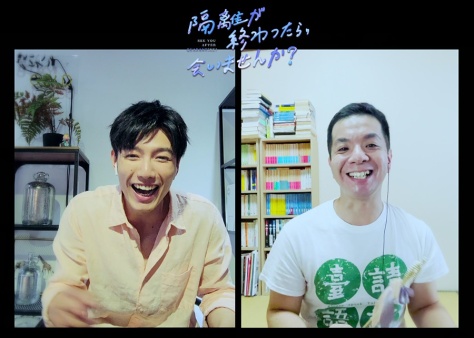 Both Sato and Bo Chun are blessed to have a supportive group of friends. While Sato’s group is more mature and financially secure; Bo Chun friends are his quirky classmates. The odd similarity between both groups is their easy acceptance of our main couple’s relationship. Sato might be more experienced of the two, but that doesn’t change the fact that he has his own fears and insecurities. They are entirely supportive of his relationship and also soothe his irrational worries. Bo Chun’s friends might be younger, but they are equally mature and accepting of his choices. Although Liying does try her best to win Sato’s affections, when she realizes that he is only interested in Bo Chun, she gracefully backs out. She even helps Sato, when Bo Chun suddenly goes out of contact, without any prior intimidation. When Bo Chun finally accepts his feelings in front of his friends, they don’t even bat their eyelash. At this point, they have already accepted their dear friend’s feelings for the handsome Japanese writer.

The finale episode did seem a bit rushed, but I’m guessing they were trying to tie the loose ends. See You After Quarantine? focuses on the robust online romances that are fast becoming a trend, in this Covid-19 ridden era. Social distancing has become inevitable and although epidemic limits the physical connection between people, it can’t restrain fate or destiny. The added attraction is the Beloved In House: I Do star Aaron Lai. Lai plays the unapologetic and proud gay, Zhao Chi Dong. Despite his eccentric nature, Chi Dong is a financial genius and a caring friend. His jovial interactions with Sato are heartwarming. The highlight of this miniseries is the strong bonding between the main actors. Their online interactions on social media are equally endearing and their camaraderie is appealing. If you are looking for short, fun-filled drama series, then See You After Quarantine? should definitely be on your watch list. Here’s hoping that we get a movie version or maybe another show with the same main leads. Because I’m certainly in love with this pairing and their simmering chemistry!