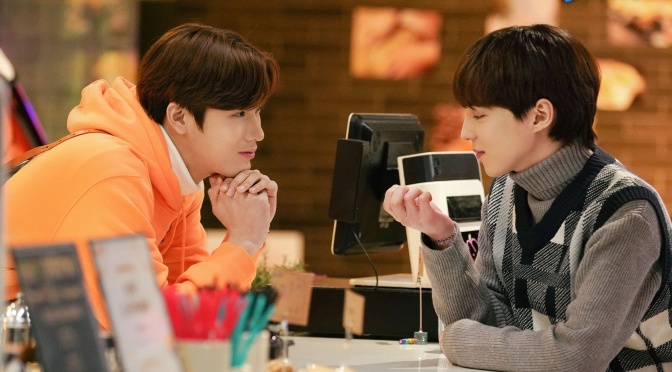 “No one can be prepared to say goodbye. Every goodbye breaks our hearts. That’s why we’re never good at it.”

Over the last year, a flood of innovative and new Asian BLs has saturated the world market, and with each new release, anticipation grows. As each company attempts to produce stand-out series, the demand for high-quality dramas is growing. Truly noteworthy series have risen from the flood to leave their stamp on the industry.

One of these is Peach of Time.

A nostalgic drama about friendship, love, regret, and grief, Peach of Time is a collaborative effort between South Korea and Thailand. It reunites beloved Thai BL actors Jimmy Karn and Tommy Sittichok in two roles that have challenged their acting skills and, hopefully, paved the way for more joint Thai and Korean BL projects.

Although some suspension of disbelief is required due to its supernatural content, the drama follows two long-distance friends, Peach (Jimmy Karn) and Yoon Oh (Choi Jae Hyun), as they embark on a journey to resolve Yoon Oh’s deepest sorrow and discover the truth behind his death. Having met years before in Phuket, Thailand, Peach and Yoon Oh have maintained their friendship online, even planning for Peach’s visit to South Korea. But, in an unexpected twist, Yoon Oh dies before Peach arrives. His death sets off a domino effect of emotional events.

Returning as a ghost that only Peach can see, Yoon Oh needs to come to terms with his life before he can pass peacefully to the other side. As he looks to the past to do this, he comes face-to-face with the complicated relationship he shares with his mother and a burgeoning romance with Peach.

Peach of Time is an emotional web full of startling and heartbreaking truths. Although I went into the drama without high expectations, it quickly drew me in and then completely owned me with the way it took three different stories—Yoon Oh’s, his mother’s, and Mario’s—and weaved them together effortlessly. All while Peach and Yoon Oh fall in love.

Still, a shadow hangs over every episode. The knowledge that Yoon Oh will be leaving as soon as he figures out what ties him to the living realm leaves a growing sense of trepidation, especially as the romance between Peach and Yoon Oh deepens.

Although Peach of Time deals with many emotional entanglements, it never feels congested or hard to follow. It does ask a lot of difficult questions, things that make each character take a hard look at themselves. Yoon Oh’s mother, in particular, faces not only the tumultuous relationship with her past and her son but with her professional career as a doctor and how it leads to Yoon Oh’s death. Through this, she changes in surprising ways. Although she can’t see Yoon Oh, these changes heal the rift between her and her son.

These haunting moments lead me to Mario. During Yoon Oh’s journey of self-discovery, he and Peach meet a Thai ghost, Mario (Tommy Sittichok), a man with mysterious origins linked to the resort that Yoon Oh inherited from his grandmother. His storyline was a surprise for me. I wasn’t sure how this character would fit into the drama. At first, I even thought he might be Yoon Oh’s father. Although it’s quickly revealed that he isn’t related to Yoon Oh outside of their connection to the resort, I loved how Mario’s character became vital to this story. Not only does he become a wise, almost paternal figure for Peach and Yoon Oh, but his inclusion offers viewers another mesmerizing love story that I wish had its own drama. Mario’s past love, who we discover is the blind mother of a young woman Peach hires to help at the cafe he opens for Yoon Oh, is something I would watch from the beginning. Tommy Sittichok holds his own in this mature role opposite an older actress, and I can’t wait to see what he tackles as an actor after this drama.

Peach of Time holds a steady pace throughout, never feeling rushed but also never feeling slow. Through each human connection and secret revealed, this drama captures its audience. In my initial review for this series, I wrote that Jimmy’s naive and warm portrayal of Peach meshes well with Choi Jae Hyun’s rebellious, damaged, and angry portrayal of Yoon Oh. That holds true throughout the entire series. The way these characters need each other even when they’re mad leaves a deep impression on the heart. The chemistry between them is explosive and captivating.

All in all, Peach of Time did a brilliant job adding continual new elements that intrigued but never felt overwhelming. It told a cross-country, multicultural, supernatural romance riddled with pain that completely engrossed me.

I like dramas that build in intensity. I think of dramas like building blocks or a game of Jenga. Things should be continually added to a series to maintain a certain pace and emotionally rivet an audience. As each new block is added or each new block is removed (in Jenga’s case), it needs to be done carefully to avoid a collapse.

Peach of Time played a masterful game of figurative Jenga. Not once did I feel disconnected. Even though the drama is headed for a sad ending centered around saying farewell, it is a beautiful love story. Goodbye truly is one of the hardest words to say. From beginning to end, I loved every moment of this story, the love built around ‘goodbye’ and the hopeful future the wish bracelets give us.

In the end, Peach returns to the cafe he opened for Yoon Oh. The building is empty and as cloaked in memories as it is dust. The wish bracelet Peach wears on his wrist suddenly falls, a bracelet that’s part of a pair he wore with Yoon Oh. As it drops, viewers are reminded that the wearer’s wish will come true if the bracelet comes off. Peach stoops to pick it up, is startled when steam rises from the kitchen, and then … that’s it. That’s the end.

With the ending, viewers are offered the hope that Peach’s wish, whatever it may be, will come true in the movie version. Let’s hope Yoon Oh makes a glorious return.

This drama should not be missed either way, and I hope it’s the beginning of many more Thai/South Korean collaborations. 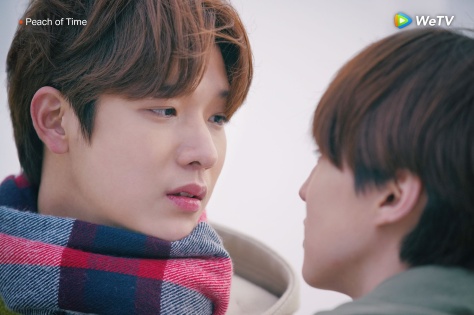