I should’ve realised earlier that I’d be very nit-picky when I rewatch something.

In terms of consuming media, 2019 was pretty much a blur for me because I had no time for myself, let alone watching things I loved. 2020, on the other hand, was a completely different ballgame altogether, so the only way I stayed sane was by binging on series that I’d missed in the previous year. It’s understandable (to me, at least) that I’d probably not care too much about things that frustrate me when I’m continuously consuming one series after the other just for the sake of watching BL.

A rewatch always puts things into perspective—it helps us pay more attention to things we may have missed or forgotten over time. This was the case when I began rewatching 2Moons2 a week ago. The memories of why I’d kept skipping here and there came back to me.

Not that it’s a bad series or anything of the sort. It definitely fared better than 2Moons, an older series released in 2017 based on the same story (also considered to be the first season) in many ways. 2Moons2 was created as a result of Motive Village becoming the exclusive copyright holder after the organisers on behalf of CCDM, the co-producers of the first series, decided not to continue with the second season. Plus, Suradet Piniwat (Bas), who’d played Wayo in 2Moons, brought to light a few issues regarding the series—but that’s a story for another day, I guess.

Directed by Aam Anusorn Soisa-ngim, 2Moons2 was released in 2019 on the CH3Plus website as well as its channel on YouTube. The series follows Wayo (Earth Teerapat Ruangritkul) and the story of his love for his high-school senior Phana (Benjamin Brasier). A Science major, he is shown to be ecstatic that he has been accepted by Kantaphat University—the same university at which his old crush is pursuing a medical degree—along with his long-time best friend Ming (Joong Archen Aydin).

Wayo and Ming get chosen as the ‘Moons’ of their faculties (Biology and Engineering respectively). It is through this contest (as well as at the dorms) that he encounters Phana again, who is currently part of the ‘Wild Doctor Gang’ with his high-school friends Kit (Nine Kornchild Boonsathitpakdee) and Beam (Dome Woranart Ratthanaphast). It looks like Phana has also loved Wayo from his high-school days. However, there’s a small problem—Ming’s senior, Forth (Pavel Naret Promphaopun), who’s also Phana’s friend—is in love with Wayo as well.

Like any other BL series that’s set in a university, 2Moons2 is about campus life, a few saowaii (the Thai alternative for fujoshi) mostly in the form of Cake (Samantha Melanie Coates) and the Angel gang, random evil women such as Pring (Mimi Kanyarat Katthiya), and other people in pursuit of the main character against his will—in this case, it’s Park (Kaprao Pongkorn Wongkrittyarat).

The cast was chosen well; they played their parts wonderfully. I’m very grateful to the Angel gang whether in this series or 2Moons—they’re the reason I first became aware of how different gender expression and identities are in Thailand. The chemistry between the main leads as well as the side couples is amazing. MingKit was more well-developed than the others, especially when compared to ForthBeam. I just wish that they’d shown more of ForthBeam’s interactions as friends first before their one-night-stand—the trip to the beach, as well as the sequence with Beam briefly opening up to Forth, was not enough.

One of the most important things highlighted by this series is the idea of consent. Both Phana and Wayo stress the need to wait for the other to be ready. Ming also asks for Kit’s permission before their second kiss. The only thing that seemed to be more dubcon was ForthBeam’s sex scene—but that was only because they were both drunk.

However, some things ticked me off. The random rape jokes peppered in through some of the dialogues had no reason to be there. I’m assuming it’s either translation issues or a deliberate addition. In either case, they’re really not funny. Rape jokes were never funny; they’re always a horrible move on the part of the creators, and it was surprising to me that they’d somehow made their way into a series that took issues regarding consent more seriously than others.

Some of the sequences, especially a lot of them with Park, seemed unnecessary as well. I suppose they were there to connect the series to 2Moons3. Nevertheless, they were never required in the first place (but that’s just my opinion). I’m also not a fan of sequences that are built on jealousy alone—especially when Wayo is shown as the one making ‘immature’ decisions because of this. 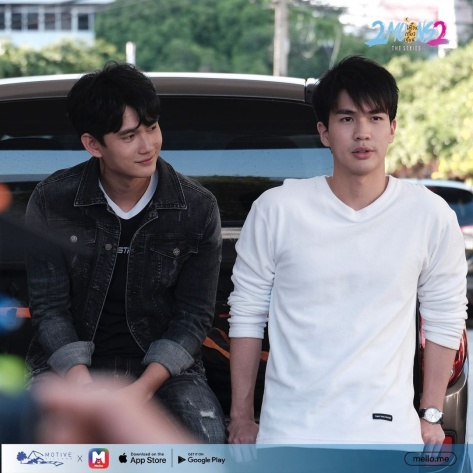 2Moons2 ends with a resolution to ForthBeam, and MingKit being a lovey-dovey couple. However, in the case of Phana, Wayo, and Park, we are left with a cliffhanger that will probably be resolved only in 2Moons3. With all the changes that have taken place—in terms of the controversies surrounding the cast leaving, as well as the original creators—I’m not sure whether I’d be looking forward to the new season as much as I did before. Nonetheless, 2Moons2 deserves a watch for all the couples in the series and the amazing chemistry present between each of them.