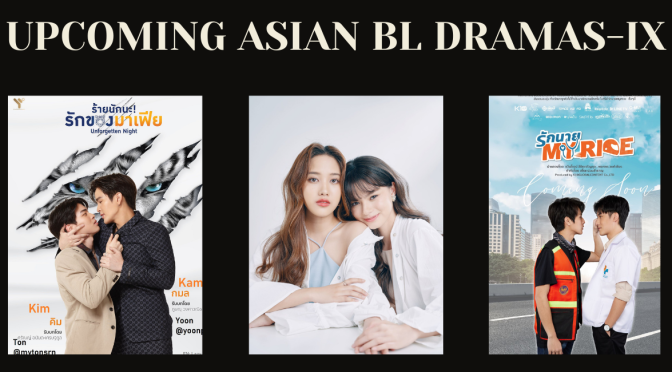 Despite the current Covid-19 situation, the BL universe is continuously churning out new dramas at an alarming rate.

Makes you wonder, if they are good or not? While we cannot answer this question until the show premieres and our teammates strenuously review them; we can offer you a sneak peak into some of the most anticipated dramas that will be launched in the later half of 2021. Without further ado, let’s take a dive into the Asian diaspora and learn more about the Boy’s Love dramas that will most probably grace our silver screens sooner than later!

Food brings people together. But can it bind two hearts as one?

Currently, one of the hottest topics on the social circuits, “My Sweet Dear” is surely taking the BL universe by storm. Korean BL star Jang Eui Soo (Where Your Eyes Linger, Mr. Heart and Nobleman Ryu’s Wedding) will be playing the main lead in this gourmet romance. Lee Chan Hyung (The Uncanny Counter) will be playing his potential love interest.

My Sweet Dear promises to be a youthful romance set in a restaurant between an extraordinary genius chef, Choi Jung Woo (Jang Eui Soo) and Laura Dining’s head chef Yoon Do Geon (Lee Chan Hyung). While the show is set to premiere in October on popular streaming portal WeTV; the show’s producers have released a short teaser. The teaser though short is assuredly characteristic of the main couple’s unusual chemistry. Jang Eui Soo’s Choi Jung Woo has a scorching hot presence and his flirtatious gaze leaves Yoon Do Geon (Lee Chan Hyung) bewildered and flustered. The trailer hints at a possible tug of war between our main couple as the tagline promises angst and reconciliation. Honestly, Jang Eui Soo is like the current BL God and I’m looking forward to watching this show, simply because his new long-haired look is entirely devastating!
You can watch the trailer here-

Gourmet romances seem to be the current flavor in Korean BL industry. As such, Idol Romance’s upcoming show “The Tasty Florida” is already making waves because of its handsome cast. With a total of 8 episodes (Est. 8-15 mins runtime/episode), the miniseries will be updated every Friday starting this Sept 24. Produced by Moving Picture Co & Emotion Studio, and directed by Yang Kyung Hee, the show stars Cha Woo Min and Yoo Hwan in main roles; while Moon Kang Hyuk, Choi Jae Hoon and Yoo Seung Jun will be playing the supporting roles. Idol Romance’s social media handles have been robustly promoting the show with new posters and has recently released a trailer. The chemistry between the main leads shines through and I’m hooked. Eagerly awaiting the release of the pilot episodes!

Hae Won, a freshman college student is very suspicious of the guesthouse where he lives in. If you follow the guests leading up to the rooftop, you will find Florida Banjeom, a rooftop Chinese restaurant with a full view of Seoul and with four handsome workers. When Hae Won’s mind is absorbed from the sound of eating jajangmyeon. Hae Won’s heart flutters when he sees Eun Gyu hitting his hand! Hae Won and Eun Gyu’s breathtaking romance begins.

This is another show that is slowly garnering attention in the BL world. Adapted from the manga “Vanishing My First Love” (消えた初恋) written by Hinekure Wataru (ひねくれ渡) and illustrated by Aruko (アルコ), Kieta Hatsukoi stars popular Japanese actors Michieda Shunsuke and Meguro Ren in the titular roles of Aoki Sota and Ida Kosuke. Alongside them, Fukumoto Riko, Suzuki Jin (Given), Tanabe Seiichi and Mochizuki Ayumu will be playing the supporting roles. The drama will most probably premiere this October on TV Asahi.

A short promotion video was recently released by the show’s official Twitter account. The chemistry and the sweet camaraderie between the main leads is lit. Check it out for yourself!

The promotional activities for this show are pretty low-key. But it is Taiwanese BL, so we are obviously looking at a tight lined storyline and an amazing casting. Following into the footsteps of popular Pinoy BL’s like “Gameboys The Series” and “Hello Stranger”, this show is the first Taiwan BL to be recorded with mobile phones. Starring Akihiro Kawaiaki as Sato Ki and Lance Chui as Chen Baichun, the miniseries will premiere on September 17. KKTV (TW) and Rakuten TV (JP). The premise gleams at a budding romance between a quarantined Japanese man who ends up falling in love with a boy he met via a video call. Surprisingly, popular BL actor Aaron Hai who recently starred in “Beloved In House: I Do” will be playing a supporting role here.

My DNA Says I Love You

Upcoming Taiwanese BL “My DNA Says I Love You” 基因決定我愛你 was recently announced with much fanfare and will start filming by the end of September. Starring Erek Lin (Your Name Engraved Herein) along with Gao Yu Chen (Because of You), Huang Hsin Hao and Lin Wei Jie, the show doesn’t have a premiere date. Although promotion posters have been released, we don’t have any news about the possible storyline or the character profiles. We will definitely keep you updated as further details are announced.

Some individual photographs of the cast members, because obviously they are good looking!

These two animes are probably the most anticipated sequels of 2021. During the Tencent Video Animation Annual Conference on August 8, 2021, where Tencent unveiled their releases for this year and 2022, both these Chinese BL adaptations were listed. Thousand Autumns or also Shan He Jian Xin, adapted from the popular danmei novel by author Meng Xi Shi, primarily focuses on the budding romance between main leads Shen Qiao and Yan Wushi. The first season was animated by Motion Magic, and produced by Tencent Penguin Pictures. It aired from Feb 8, 2021 to Mar 15, 2021, for a total of 16 episodes. The finale episode ended on a cliffhanger, where Yan Washi sacrifices himself to save Shen Qiao’s life in the battle against their enemies. Tencent Video has unveiled the concept art visual and PV for the sequel as shown below.

Adapted from Mo Xiang Tong Xiu’s danmei novel “Chuan Shu Zijiu Zhinan” or also known as the Scum’s Villain Self-saving System, Scumbag System first premiered on September 10, 2020, until November 12, 2020, and ran for a total of 10 episodes. The adaptation is animated by Djinn Power and produced by Tencent Penguin Pictures. The Donghua garnered appreciation for its rustic CGI effects, which have captured the hearts of the fandom. The anime focuses on Shen Yuan, an ordinary young man who transmigrates into the body of Shen Qingqiu, his favorite novel’s scum villain. Fighting his fate where Shen Qingqiu is destined to be tortured by his disciple Luo Binghe, Shen Yuan tries his level best to redeem Qingqiu’s past mistakes. The finale episode ended on an odd cliffhanger where Luo Binghe is pushed off the cliff by Shen Yuan. Although the premiere date hasn’t been announced, Tencent has released a trailer for the upcoming sequel. The devious Luo Binghe returns to avenge his downfall and the chemistry is pretty obvious!

Thai BL industry is slowly venturing into the “Girl’s Love” territory. As such, we have our first Thai GL show, featuring popular actress Becky Armstrong (of Tharntype fame) alongside rookie actress Freen Sarocha. Adapted from the novel “GAP” by Devil Planoy (เจ้าปลาน้อย), the storyline focuses on the romance between a young intern and rich Chairwoman. The show’s official Twitter account are promoting the GL with frequently posting posters of the main leads and their chemistry is indeed promising.
Synopsis-

Mon, a newly graduated student from university, starts working as an intern in a big company because she admires Sam, the super rich chairwoman since young age. However, when Mon met Sam again, her image of her completely crashed, since she was not like the media shows her.

If you are looking for mafia romance with hints of the BDSM lifestyle, then upcoming show “Unforgettable Night” should be high on your watch list. Adapted from the web novel “Mafia’s Bad Love” (ร้ายนักนะ…รักของมาเฟีย!!) by Yoe Nim (ยอนิม), the show focuses on the unhindered romance between a simple office worker and a mafia boss. The promotion posters are scorching hot and they have set the parameters too high. Starring in main roles, we have popular BL actor Yoon Phusanu (of YYY The Series, Close Friend, Y Destiny fame) alongside Ton Saran (Y Destiny). Yoon Phusanu is establishing his mantle as a formidable BL actor and this show will surely be a stepping stone to his achievements. We have a ginormous cast playing supporting roles, which include Atom Noraworn, Peat Suchanon, Khopkhet Natkharin, Ice Saranwich, T Apiwat, Tan Tanchanit, Baitoey Punnisa, Samantha Melanie and Ging Areeya.

It’s the only night to know what your true needs are. And it was the only night that made the mafia “Kamol” not want to let Kim belong to anyone Kim, a 25 year old office worker, has been in one sided love with his senior, Day, for a a long time. To forget about him and move on, he decides to have one night stand with a random stranger he met at the bar. What he didn’t know was the stranger would start liking him to the point of no return. Kamol, a 30 year old mafia, has some special needs in bed and so he keeps switching partners but no one is able to satisfy him. One night he meets Kim, who perfectly meets his needs. Right at that moment, Kamol decided to make the man his own and starts pursuing him.

My Ride The Series

An anticipated show indeed, but My Ride The Series has been on the hold, because of financial constraints. But it seems the show has found new producers and as such, workshops are being conducted. The official social media accounts are busy posting promotional posters and videos of the cast. Adapted from author Patrick III Rangsimant’s popular novel of the same name and starring Fame Chawinroj along with Fluke Pongsakorn in lead roles, the drama is about the sweet and innocent development of a friendship and then love between a rider and his passenger.

Dr. Tawan often hires Mork, a motorcycle driver, to drop him at his dentist boyfriend’s apartment after work. One day, however, when Mork knowingly makes Dr. Tawan late for his date, Dr. Tawan finds out that his boyfriend has been cheating on him. Heartbroken and feeling betrayed, Tawan breaks up with his boyfriend. In the meantime, his friendship with Mork continues to grow.

M Flow Entertainment (who produced Second Chance The Series) have announced the main leads for their upcoming Thai BL drama, Coffee Melody The Series. Starring Pavel Phoom (2moons2 fame) and Benz Panupun (Call It What You Want) in main roles, the show hints at a cafe romance. The show is still in the casting and pre-production stage. As such, we will get you further updates, as soon as they are available. Frankly, Pavel and Benz do look good together.

Keep watching this space as we bring you further updates about Boys’ Love from all over the Asian Subcontinent!