Tencent’s latest offering The Lost Tomb 2: Explore With the Note has certainly made a splash. Shot entirely in the scenic snow terrain, the drama follows main lead Wu Xie on his search for the mysterious, mythical Cloud Palace.

Adapted from the fourth book of “The Grave Robbers’ Chronicles” (盗墓笔记) by Kennedy Xu (南派三叔), this sequel succeeds the second season of the hugely popular franchise. In Lost Tomb Season Two, our main lead’s expedition takes them beneath the sea. In an ancient Ming Dynasty ship, they encounter monstrous creatures and puzzling traps. Wu Xie discovers a snake-browed copper fish from the box he finds in the Seven-Star Coffins of Lu Wang’s Palace. In the current season, the Iron Triangle are forced to co-operate with the treacherous antagonist Cox Hendry. He is hellbent on discovering the exact location of the Cloud Palace. With Wu Xie’s Uncle, Wu San Xing acting exceedingly suspicious, our innocent main lead is falling apart from the added stress. As reminiscent in most Lost Tomb adaptations, we have an odd mix of new actors alongside some of the old casts who reprise their roles from the prequel. Don’t expect anything phenomenal from the storyline, since it is full of loopholes. But if you are an avid fan of this franchise, then this drama should definitely be on your watch list! Following the events on the Paracel Islands, Wu Xie is recuperating in the hospital. To find his missing Uncle’s whereabouts, Wu Xie starts on a journey to investigate the Stone Pagoda of the Missing Palace. He keeps getting into troubles, until Zhang Qiling makes a surprise appearance. Very soon, Wu Xie figures out that his Uncle is in cahoots with Cox Hendry and Wu Xie is assigned to lead a team to the Cloud Palace on the Chinese-Korean border. Unaware of the true objective of this mission, the Iron Triangle search for the mysterious palace while facing a world of glaciers, avalanches, and blizzards. Wu Xie and Fatty Wang are accompanied on this journey by veteran tomb raider Chen Pi A Si who has his own interests to look out for. They are joined by the mountain guide Shun Zi, who seems equally suspicious. In order to monitor Wu Xie and safeguard him, Ah Ning follows them with a team of foreigners. As they move deeper within the maze of mountain tunnels, the entire team begin to wonder about the significance of this mission. Is it worth endangering their lives for?

There is something different about the way Bai Shu portrays Wu Xie. He is no longer the wide-eyed innocent boy, relying on his Third Uncle, Wu San Xing. His Uncle’s betrayal has left him heartbroken and bereaved. As such, he doesn’t trust anyone, not even his close friends, Fatty Wang or Xie Yu Chen. Throughout this show, Wu Xie constantly questions his Uncle’s true intentions. Although he is skeptical of his Uncle’s hidden agendas, the one thing that doesn’t change is Wu Xie’s unwavering affection for Wu San Xing. Instead of taking everything at face value, Wu Xie is rather hesitant and as such, he makes uniform decisions after careful deliberation. Yes, the storyline is hinged with loopholes, but I was pleasantly surprised by the change in Wu Xie’s personality. He is obviously curious about the mystery hidden inside the Heavenly Cloud Palace, but rather than rushing into situations; Wu Xie tries his level best to analyze the problem. Despite his mistrust, Wu Xie still acts humane in most situations and tries his level best to ensure his teammates safety. 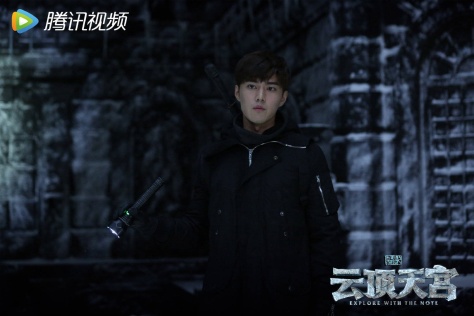 Zhang Qiling is an enigma; so it’s quite difficult to understand him, from the micro expressions that are a consistent trait of this character. However, this show bestows us with a different shade of Zhang Qiling’s personality. Zhao Dong Ze’s Qiling isn’t hesitant in expressing his opinions or displeasure. Frankly, this is the first time that I have actually seen Qiling string more than ten words together in an entire show. Despite being bewildering, Zhao Dong Ze’s Qiling is endearing and realistic. Obviously, he still has his moments of “Random Disappearances”. But it is quite clear that Qiling is on a pursuit of his own. Despite that, Wu Xie remains his priority and the adoration is quite obvious. Unexpectedly, Qiling looks exactly like the Miao Village Leader who led the tribals decades ago (the tribe guards the Missing Palace from outsiders). The correlation isn’t fully investigated, so we will never know if the Village Leader was Qiling or an uncanny lookalike. He also seems to have some close connection to the Cloud Palace, because his emotions are quite unstable and he seems oddly repentant as well as aggrieved. The show does a poor job of explaining his connection to this place, given the fact that Qiling is amnesiac. We are yet again left in the dark about his lost memories and I’m really hoping that future adaptations give us a better insight into Qiling’s past life. 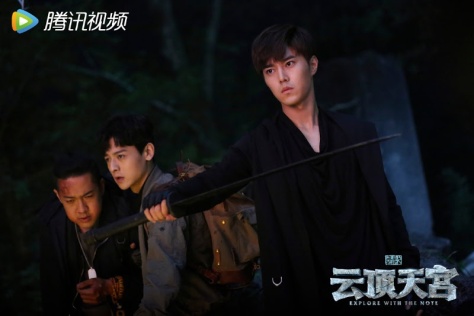 The show starts on a sour note where Wu Xie spends most of his time belittling Fatty Wang’s efforts, while he nurses him back to health. Despite the fact that Wu Xie treats him unfairly and acts overtly frustrated, Fatty doesn’t give up on caring for his unruly best friend. He evens follows Wu Xie on his journey to the Miao Village and stays beside him despite the difficult situations. Although he reportedly acts as a spy for Cox Hendry (Hendry tricks him into submission by buying his store), Wu Xie’s safety is of utmost importance to Fatty. I was shocked by Fatty’s contributions during their expedition to the Cloud Palace. I was pleasantly surprised by his random outbursts of intelligence, whereby he would give valuable inputs. The Iron Triangle isn’t definitive yet; Fatty Wang is still tagging along for Wu Xie’s sake and Qiling’s main focus remains on safeguarding Wu Xie alongside recollecting his memories. Their only connecting link is Wu Xie and this is where the foundation for their friendship is laid.

If you thought the “PingXie” romance was strong in Ultimate Note, think again. Bai Shu and Zhao Dong Ze have a refreshing chemistry which is comparable to Joseph Zeng and Xiao Yu Liang (from Ultimate Note). The first few episodes try to push the “Ah Ning and Wu Xie” love agenda. But Qiling’s appearance is enough to shift the focus back to our sweet couple. While Qiling spends a lot of time high tailing Wu Xie out of trouble, their slow burn chemistry is still intact. Qiling cares a lot about Wu Xie and is quite vocal about his feelings (which was a welcome change). Even in the midst of strong magnetic field while being stuck inside the caves, Qiling’s was entirely focused on ensuring Wu Xie’s safety. Zhao Dong Ze is excellent at portraying Qiling’s affections via his micro-expressions. Wu Xie for his part spends an awful amount of time worrying about Qiling’s whereabouts. Although his dynamics with Ah Ning seems to be changing, his world tilts on the axis whenever Qiling makes his entrance. Their relationship undergoes a swift change in this show and it is obvious from their inherent closeness. While Qiling gives Wu Xie a sense of security; in the midst of an untrustworthy crowd, Wu Xie is Qiling’s comfort zone.

We have a lot of actors reprising their character roles from The Lost Tomb Season Two. The prime focus of this show remains on Wu Xie’s strained relationship with his Third Uncle, Wu San Xing. Yao Lu’s portrayal of Wu Sanxing is quite consistent with the character’s dubious nature. Also, this show marks the return of Xie Lian Huan, the Xie family heir and Xie Yu Chen’s paternal Uncle. We finally learn the mystery behind his disappearance, as well as the intermediary connection between Lian Huan and Sanxing (they are distant cousins and look exactly alike). Wu Xie spends a lot of time questioning his Uncle’s true identity and finally discovers the fact that Xie Lian Huan is actually masquerading as Chen Si Ah Si. Another noteworthy character is Pan Zi (Bai Yi Hong). His unswerving loyalty and devotion to Wu Sanxing extends to Wu Xie. He spends most of his time going back and forth trying to protect the Wu family descendants. I’m always amazed by his steadfast attitude and reflexes. While Wu Xie faces troubles on the expeditions, Xie Yu Chen (Liu Xue Yi) and Huo Xiu Xiu (Huang Yi) have an intense face off with Cox Hendry on their home turf. Their investigations into Hendry’s illegal dealings leds them to the Huo Family Matriarch, Grandma Huo. The show delves into the Huo family tragedies as Yu Chen digs deeper into the mystery behind the disappearance of his Uncle. 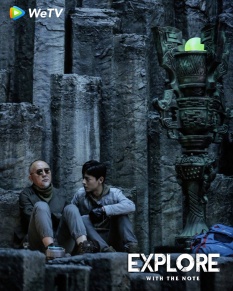 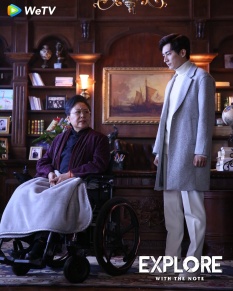 Explore With the Note suffers from time lag and inconsistency in some scenes, but the drama’s saving grace is the eccentric dynamics between the main leads. Most “Lost Tomb” adaptations are ridden with major infestations like bugs or snakes. This drama doesn’t deter from the usual route, so we have giant centipedes roaming the Imperial Mausoleum and Human faced Owls devouring humans. While some might find their repeated depictions annoying, avid fans will most probably be used to these overtures. The live-action dramas are characterized by dangerous trials and tribulations which increases the thriller elements; Explore With the Note is no different. The cinematography is amazing and the picturesque mountainous terrain will leave you spellbound. Although the show ends on a cliffhanger; the loose ends have been neatly tied up, which align with Ultimate Note’s storyline. I’m definitely looking forward to watching the next adaptation.