The storyline is in continuity with the prequel, as our heroes from the Court of Exorcism fight against the Demon Queen, who is hellbent on destroying the peace and tranquility in the prosperous city of Chang’an. Sparkly Animation Studios have left no stone unturned to orchestrate stunning visuals with brilliant CGI effects, on par with the first season of this Donghua. Without further ado, let’s review the first two episodes of this exciting new series! As the Court of Exorcism vanquish the Fox Demon Queen, she kidnaps the Imperial Consort Yang Yuhuan. The Emperor orders them to protect the city of Chang’an from the Fox demons and dispatches the Elite Army to assist them. The Demon Queen causes a downpour of blood rain which turn into bloody rom and bewitch the soldiers guarding the Palace. As the Exorcists fight the demons on large, Li Jinglong questions the careless attitude of the Demon King of Chang’an.

The Fox Demon Queen on the other hand has plans to awaken her dead sister who rests inside the body of the Consort. As they rush to open the Palace gates, demon Xuanyin arrives to help the Demon army. The Exorcists act in tandem to kill her. Later Li Jinglong and Hongjun leave to search for the Imperial Consort. As they confront the Demon Queen, horrifying truths are revealed. Will Hongjun change his future course of action? Or will his love and respect for Li Jinglong change his mind?

Sparkly Animation Studios have outdone themselves with the brilliant CGI effects accompanying the fight scenes. Legend of Exorcism is largely characterized by the battle scenes between the Court of Exorcism and the powerful demons colluding with the Fox Queen. As such, the sequel opens with shocking visuals of a battlefield where the Exorcists level the ground with the powerful Demon Queen. She is enraged, vengeful and has dormant plans in motion to destroy the city of Chang’an. As they successfully work past her powerful charm and tear it into pieces, the vengeful demon kidnaps the Imperial Consort Yang Yuhuan. Another battle scene that caught my attention occurs in the second episode where Ah Tai, Mo Rigen and Qiu Yongsi fight against the pipa playing demon, Xuayin. She can cast powerful spells with the magic of her pipa tunes. The scene is vividly played out, as our Exorcists use their individual powers to stop her influence. A major part of the first two episodes focused on battle scenes and although I’m not complaining, they do seem to drag.

Ah Tai spent the better half of the first season flirting with Hongjun who never returned his affections. The sequel opened with the promise of a fresh romance between our Persian Prince and Qiu Yongsi. He suddenly jumps into Ah Tai’s arms, when they are attacked by a hybrid demon. Qiu Yongsi is presumably scared of “Strange looking demons” and it was amusing to watch Ah Tai’s shocked expressions. He fails to comprehend his friend’s sudden proximity or fear of demons. Later, when Qiu Yongsi is about to be attacked by another demon while casting his waterproof spell, Ah Tai rushes to protect him. These two really look good together and I’m hoping for sweet moments where we get to learn more about our mysterious Prince and his calligraphy expert!

The Court of Exorcism’s Theories As Li Jinglong consults with his team about ways to deal with the demons, they suggest that he should use the Heart Light’s powers. Li Jinglong resolutely disagrees. Hongjun encourages Jinglong and teaches him the correct way to channel the Heart Light’s powers through the various meridians in his body to his sword. Later, they try to think of ways to stop the bloody rain and Qiu Longsi used his waterproof spell to stop the spread of magic. The team also wonders about the sudden resurgence of the demon army in Chang’an. Zhao Zilong explains that unlike humans, lower level demons only listen to the mightiest one, the Demon King. Li Jinglong remembers that they once mentioned the Black Dragon (the Demon King of Chang’an). He finds it is strange that the Demon King is amiss, despite the fact that Chang’an is in turmoil. Qiu Yongsi acquiesces saying that something seems strange and surmises that the Fox Queen might be responsible for it. 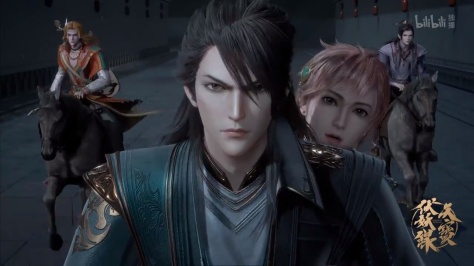 The Mystery Behind The Pipa Playing Demon While on their way to rescue the Imperial Consort, the Exorcists are restrained by the Demon Xuanyin. Hongjun realizes that she is the same interloper who attacked them earlier in the Beauty House. Li Jonglong and Hongjun escape from her clutches while Ah Tai, Mo Rigen and Qiu Yongsi take over the fight. They try their level best to fight her tuned attacks, but they are unsuccessful. Left with no other choice, Mo Rigen changes into his werewolf form and bites her into submission. Consequently, the Elite Army are released from the bloody rom bewitching and return to their senses.

After Hongjun destroys the blood rom, he goes onto confront the Demon Queen. She not only discloses her true identity but also reveals shocking secrets related to Hongjun’s past. Hongjun is left stunned when she shares that the dragons Ya Zi, Suan Ni and Ba Xia were actually the predestined Princes of Tang. Since her dead sister Yu Zaoyun’s Soul rests inside the Inperial Consort’s body, she won’t be able to bear human children. Hongjun correctly deduces that she intends to wake up her long lost sister (who was killed by Kong Xuan). She further reveals that Lady Guo is already gone and that she is Wu Qiyu, the Demon Queen. When she slanders Kong Xuan, Hongjun gets enraged and calls upon the powers of Thunder, Wind, Fire and Water to form the God Slaying Sword.

The terse situation led to another spectacular battle scene where Hongjun reconvenes his Father’s powers. The similarity between Father and Son is striking and will leave you spellbound. Hongjun cuts the Queen Demon’s tail and as such she reverts to her human form. Hongjun realizes that Wu Qiyu wouldn’t dare harm his father, as long as he has the God Slaying Sword. Wu Qiyu relishes sharing the name of the true murderer.

She daringly reveals that Kong Xuan was executed by King Stillness. King Stillness was the official title of Di Huaiying, Founder of the Court of Exorcism. He murdered Kong Xuan with the same sword that Li Jinglong wields in the present. Hongjun is left speechless with this news, while Li Jinglong comes to the realization that Hongjun was born to a demon. Despite the shocking news, Li Jinglong still decides to protect Hongjun. When he questions Wu Qiyu about the Black Dragon, she informs him that the Demon King has escaped. She is officially the Demon Queen of Chang’an. As Li Jinglong battles the Fox Demon, she pushes him off the tower. Watching Li Jinglong fall to his death releases the stupefied Hongjun from his trance and he jumps off to save his Chief. After zealously following the first season of this popular Chinese BL adaptation, I was buzzing with anticipation while awaiting the premiere of the sequel. The second season did not disappoint, as the Donghua is blessed with an intriguing storyline resplendent with stunning visuals and CGI effects. The storyline progresses on a steady pace, as we find the answers to quite a few questions from the first season.

Li Jinglong and his teammates now have the added advantage of the Elite Army. They have also earned the Emperor’s trust as well as appreciation. The second episode finally digs deeper into the mystery behind Kong Xuan’s unfair execution. Which leaves us with some important questions- Will Hongjun still want to be a part of Court of Exorcism? Will he give up on the mission assigned by his adoptive Father? I’m hoping that his affections for Li Jinglong steer him in the right direction. Their mutual respect and trust forms an important basis of this storyline. As such, I’m hoping it will bring back Hongjun from the edge and save him from self-destruction. Keep watching this space for further updates on this on-air fantasy saga!